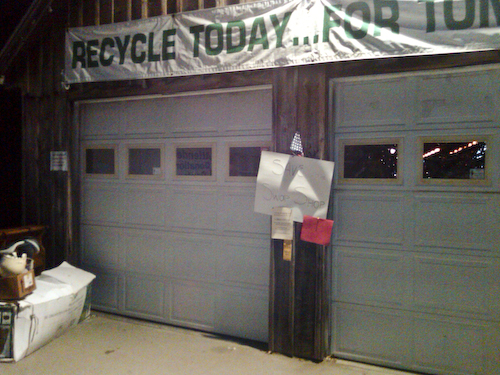 Unless the Board of Selectmen steps in to intervene, Southborough’s beloved Swap Shop is scheduled to close for good on Thursday. As of Tuesday night, Chairman Bill Boland said he had not decided whether to instruct the DPW to keep the shop open.

“We’re doing a lot of investigation. There’s a lot to consider,” Boland said.

The decision to close the Swap Shop was made by DPW Superintendent Karen Galligan in response to what she said was abuse of the system. Galligan had the unanimous support of the Board of Selectmen, but residents have strongly opposed the decision. More than 700 signed a petition to keep the Swap Shop open, and a post here announcing the closure has garnered more than 100 comments.

Boland said he has considered little else since the decision to close the Swap Shop was announced last week, spending much of his time “pouring over email.” He said he has asked Galligan for additional information on the problems she and her staff have identified with the Swap Shop. He has also talked with counterparts in other towns that have systems similar to the Swap Shop.

Boland said one of his main concern is for DPW employees. In a report to selectmen last week, Galligan said some residents get confrontational with employees when they attempt to monitor use of the shop. Boland said that behavior was evident at the Swap Shop as recently as this weekend.

Boland said there were “serious instances” on Saturday of residents confronting DPW employees over the Swap Shop’s planned closure. “To say they were treated rudely would be too nice,” he said.

Boland said any decisions about the Swap Shop’s future will be communicated today. “If I think it’s in everyone’s best interest, that means residents as well as employees, I will ask (Galligan) to keep it open,” he said.

It goes without saying that I’ll let you know if and when I hear anything, so be sure to check back.

You know my wife and some family members in southboro are some of the people who enjoy “stcking their head” in the swap shop for an occasional good book. One time a young nephew got a like new dehumidifier. I personally dont enter the swap shop, I have enough “stuff” or “junk”. I tend to leave it when my wife isnt looking. She is a pack rat, I am a cleaner. Now, I have to agree with Karen of the DPW. I have seen all that she mentions in a previous post first hand. I have seen nice people like Joe threatened by a guy who goes and cleans out the 5 cent cans that are for the boy and girl scouts. I see the out of town cars with no dump stickers “parked” There all the time. I am one of those people an immagrant literally snatched a fan out of my hands. It ended in an latercation. Him in the dumpster. It was rude and very goshe. Unfortunately like my wife said alot of good stuff will go in the dump. that is why I support “pay as you pitch” policy. There are so many issues with the dump. You see contractors you know are contractors in town dumping and filling the containers every day. THat is not right. They should pay to have that stuff taken form theri jobs. And I think the DPW crew does a good job but I think one at the controls in the main area is good and one at the recycle area is plenty. And for God’s sake Southboro Residents, but considerate and decent to the employees. They are doing their job. Your job. Be kind. And lastly, if you dont like the state of things, get on a committee and contribute to town politics. Perhaps then we dont have to hire a “Town Manager” that will cost us another $150K a year plus benefits.

Maybe we need to occupy the swap shop at closing today so that they can’t close it. Bill Boland appears to be wishy washy. I understand he wants to support Galligan but he works for us not her. Maybe that should be a consideration. What appears to be happening here is that the BOS will close it temporarily to “teach us a lesson” about bad behaviour that is brought on by a few. I rarely use the swap shop, I have enough junk of my own. I was however, very glad that I could put some furniture there that was in great condition when I moved again simply because I didn’t want it and didn’t have the time nor the willpower to put it on craigslist. I think it is a great resource. Let’s face it, the guys that work there are paid to go through the stuff and paid to throw it away if they see fit. Instead of paying somebody to stand in the booth doing nothing for hours on end or have social hour with friends who are taking up spaces at the hopper, I don’t see why they can’t go through the swap shop stuff while they are being paid to work. With budgets tight (both ours and the towns) these are the kinds of things you notice. I am not saying (I expect there will be a few comments on that) that they have to work every single minute but they aren’t being paid our tax dollars for social hour in the booth.

Am I mistaken as I read through these comments…are people allowed at our recycling/swap shop area with no sticker? I thought you had to have a sticker to enter at all…maybe that would easily solve some issues…issue out of town stickers at a higher rate for out of towners for the swap shop/recycling area????
When our sticker has run out, we never even go to the recycling area as I thought I was not allowed to…..

Diana, you are required to have a sticker to use the Transfer Station, whether it’s the hopper, the recycling area, or the Swap Shop. The allegation made by some commenters is that people without stickers are sneaking through and not getting written up. I don’t know if that’s true or not.

A sign on the Swap Shop states that it will now remain open until December 7.

Sorry-got it wrong. The correct date is January 7.

Here’s the official announcement on the closure delay: https://mysouthborough.com/2011/11/30/breaking-news-swap-shop-closure-has-been-delayed-until-january-7/