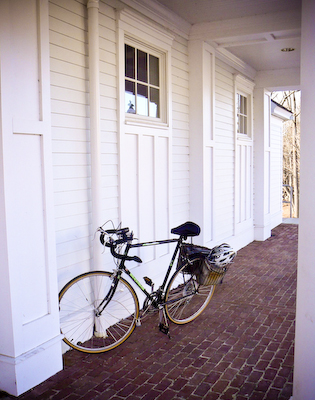 Above: Dick Upjohn’s bicycle rests outside a building at Fay School after his death last week (photo via Facebook)

Southborough lost one of its great residents last week when Dick Upjohn died suddenly at the age of 82. I only knew Mr. Upjohn by sight, but what an awe-inspiring sight he was. He famously rode his bicycle all over town, briefcase strapped to the back. For my part, I would most often see him out jogging along Deerfoot Road, no matter the weather. It’s a sight – and a source of insipration – I will greatly miss.

Mr. Upjohn was a lifelong environmentalist and served on the town’s Conservation Commission for a reported 34 years. He was also a founding member of the Community Preservation Committee and a longtime member of the Emergency Planning and Management Committee. For more than decade he was a dedicated member of the Pilgrim Church Bell Choir.

For more than 50 years, Mr. Upjohn served the Fay School community as a history teacher, athletic coach and administrator, and for many years as the Chairman of the History Department. And it was at the school that he died. After biking to campus as he did every Wednesday, Mr. Upjohn collapsed in the faculty dining room. Efforts by staff and Southborough emergency personnel to revive him were unsuccessful.

“It is perhaps some small measure of comfort to know that Dick’s last moments were spent in one of the places he loved most,” Fay wrote on its Facebook page.

In the wake of Mr. Upjohn’s death, many who knew him have shared their tributes. Here is a sampling.

Southborough has lost a great advocate and role model this week. Dick Upjohn served on the CPC since its inception in 2004 and I can’t remember him missing a meeting. Each year Dick volunteered to read the CPC Warrant Articles at town meeting and wrote the CPC year end report. During meetings Dick always voiced his opinion (popular or not) and supported it with facts, data, a vision for the future and a touch of common sense (which sometimes gets overlooked). –Andrew Mills, Chairman, Community Preservation Committee

A few years ago, biking with my daughter, we caught up with another cyclist on Bridge Street in Southborough. He had a briefcase strapped to his back wheel. It was Dick Upjohn, my daughter’s teacher from more than a decade earlier. He greeted us warmly, complimented her on her performance in the Fay School musical, as if had been the day before, and explained that he was returning from inspecting a septic system for the Town’s Conservation Commission. We talked about the needs of the Town. “See you at Town Meeting,” we said in parting.

Dick gave to Southborough, to Fay and to his students over so many decades in so many ways, no list can begin to capture the dedication he exemplified. –John Butler, Advisory Committee member / Former Fay School parent

SOLF is saddened to learn of the death of Dick Upjohn. SOLF chose him to receive the Elaine Beals Conservation award last year in recognition of his dedication to conservation and environmental education…His encyclopedic knowledge of conservation issues in town is irreplaceable and will be sorely missed. –Sally Watters, President, Southborough Open Land Foundation

He could skate and shoot that basketball with complete grace. –Andy Guerra-Mondragon, former student (via Facebook)

You can find more tributes in the comments on this post.

I had the honor and privilege of knowing Dick Upjohn for more than 20 years and calling him my friend. I am very grateful that his family gave me the opportunity to share my remembrances of Dick at his Memorial Service at Pilgrim Congregational Church in Southborough.

As a said to the standing room only gathering at his Memorial Service, the best way that I can describe Dick, a life-long Christian, is by calling him a mensch, the Yiddish word for “a person of integrity and honor,” and “someone to admire and emulate.” (See Leo Rosten, The Joys of Yiddish)

I first met Dick in the summer of 1990 after my wife Rhonda was appointed as a member of the Southborough’s Conservation Commission by the Southborough Board of Selectmen.

At that point, Rhonda and I had only lived in Town for one year, and Dick was a well-established and respected member of the community, and a long standing member of the Conservation Commission.

Dick warmly welcomed Rhonda to the Commission, and she never left. They served together on the Commission for 22 years. They and their fellow Commission members: John Leeds, Mark Possemato, Chris Molinaro, AJ Purcell, Russ Gregory, the late Annie Levitt, the late Edgar Phaneuf, and the late Lou Bartolini, and Commission staff members Joan Ferretti, Beth Rosenbloom, and Chris Lucas, made environmental protection in Southborough a noble enterprise.

Dick’s affection also extended to the family members of Conservation Commission members. I can attest to that. Dick treated me with great affection. His affection was reflected in many ways, including telling me when I first met him that he was envious of the number of vowels in my name.

To make his point, he took a piece of paper, wrote his full name and my full
name on it, and then counted the vowels in our respective names. He pointed out that his full name, Richard Vassall Upjohn, had 6 vowels, and that my full name, Salvatore Michael Giorlandino (a good Yankee name, as I told Dick), had 12 vowels. Let’s just say, it was the start of a beautiful relationship!

In all seriousness, Dick’s reference to the vowels in our names was a powerful teaching lesson and profound statement that just as vowels bring words together, human beings should be the vowels that bring humanity together by doing good works. Dick was the role model as evidenced by his great love and devotion for his family, his friends, his beloved Fay School, Southborough, and the environment.

For these reasons, I urge the Southborough Board of Selectmen to create the annual Richard V. Upjohn Community Service Award to honor members of the Southborough community who have made the Town a better place through their volunteerism and good works. If you agree, please e-mail the Selectmen (their e-mail address is selectmen@southboroughma.com) and voice your support for my proposal.

In conclusion, thank you Dick. I was blessed to have known you.

I had Dick Upjohn for a teacher at Fay many years ago, also had him as a coach. He was a wonderful person. After I left Fay and moved on to High School, College and Law School, whenever he would see me he would ask about school and how I was doing. When I got involved in the town government he would always express how important it is to give back to one’s community. I last saw him about one year ago, he asked me how life was going, what I was doing, it was almost like I had just left Fay, I was amazed about how much he remembered about me and Fay which was 30 years before.