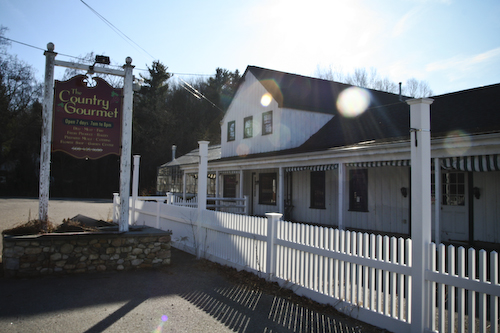 I wasn’t able to go to last week’s Zoning Board of Appeals meeting, but a write-up in the Metrowest Daily News suggests the board expressed both support and concern over a proposal to return the Capasso Farms property on Framingham Road to a working farm.

The Capasso family is petitioning the ZBA for a use variance to allow two area businessmen to set up what they called a “family farm” on the property that would feature farm animals, a bakery, coffee, penny candy, and produce. A variance is needed because the property is zoned residential and the grandfathered zoning that allowed Capasso Farms and the former Country Gourmet to operate there expired in October.

According to the MWDN, ZBA Chairman Matt Hurley and alternate member David Eagle stated their support for the project, saying it would further the best interests of the town.

But member Leo Bartolini said he was concerned a variance would not hold up under appeal because the family has not demonstrated “hardship,” which is the legal basis for granting a variance.

You can read more about the discussion in this article by the MWDN. The Capasso family will be back before the ZBA at their meeting on January 25.

If you read the MWDN article it all seems fine and dandy…..until you get to the bottom where it mentions that one of the potential buyers was sentenced to jail time for fraud. That would be called a red flag.

By digging a little deeper, one can easily find evidence of other red flags….more specifically that Mr. McKunes is a landlord for 2 properties (one in Worcester and one in Milford) where there are many documented concerns, complaints and even involvement by the towns public health directors. And that’s putting it nicely.

In addition, both these gentlemen (Santos and McKunes) run landscaping businesses and don’t seem to have ever run a business involving produce, farm animals, etc.

Mr. Boland is right on the money……Sounds like people haven’t done their homework.

My two cents: Yes, it may be a great idea to get a “Capasso-like” farm up and running again, but not to these 2 guys. No way.

I have some concerns, too. Especially about the treatment of animals. I don’t think there will ever be a family farm at Caspasso’s. until people with real farming experience and a love for running one, purchase the property. We need more background studies. And oversight from A to Z. We don’t want to be another farm like the Whitney farm has become in Northborough.I am not anti business, but would feel a lot better if one of the buyers had not been in jail.

I agree with Lee.

The article states “…because the family has not demonstrated “hardship”…”

I would like to point out that the property is not and has never been owned by the very pleasant and extremely hard working Sherrys who ran Capasso’s. The farm and the land, including the land on the side of the Overlook Rd, is owned by Mrs Sherry’s father, Mr Capasso who is a real estate developer with his company based in Newton.

That alone should have no bearing on the decision in this case, but I wanted to ensure readers understand this is not a “family hardship” issue. Its a business decision.