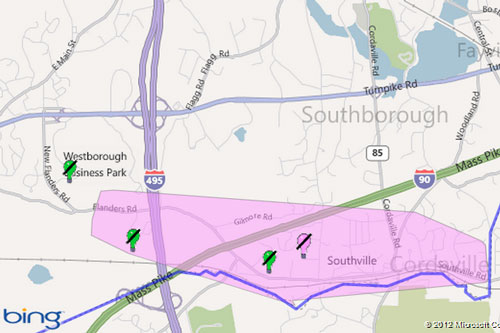 Above: National Grid outage map from earlier this morning (source)

For the second time this week, residents on the south side of town woke up to no electricity. National Grid reports 71 customers lost power at around 7:45 am today. On Tuesday, 100 customers also on the south side were without power for a couple of hours in the morning.

Today’s outage was thankfully brief. National Grid said power would be restored by 9:00 am, but some residents reported the lights came back as early as 8:30 am.

The outage stretched along the entire length of Southville Road, from the Ashland board on the east past Interstate 495 on the west. Residents on Woodbury Road, Attwood Road, and Gilmore Road among others were reportedly without power.

No word on the cause, but as it did on Tuesday, the outage came after a couple of inches of snow fell overnight.

National Grid reported this as realted to an accident on Flanders Road.