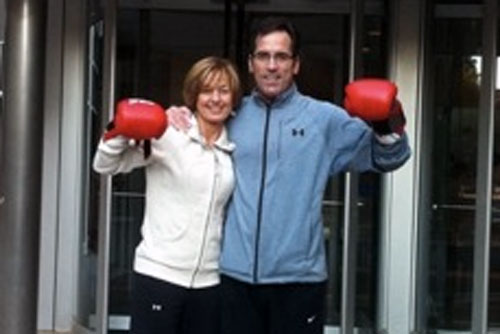 Above: Southborough resident Sean McCarthy with wife Christine on the day he left Mass General Hospital after getting a new set of lungs (contributed photo)

The Metrowest Daily News this weekend ran a story about one remarkable Southborough resident with one remarkable – and inspiring – story. Have a look:

Big deal? More like huge for Sean McCarthy. As huge as being able to walk his dog, attend a football game at his alma mater, Holy Cross, or go on a trip to Florida to play golf.

It’s been almost 17 months since he received his new lungs, but McCarthy still savors every moment of ordinary life they’ve brought. Or as ordinary as life can be when you have to take about 50 pills a day. At least it’s down from the 62 a day he was taking after his two-month stay at Mass. General following the transplant.

“I’m still not over the giddiness,” said the 47-year-old. “I run up the stairs now, because I can.

Friends tell me Sean and his wife Christine, herself a cancer survivor, have worked to raise a million dollars for Cystic Fibrosis research. Pop on over to the MWDN to read more about Sean and his new lease on life.