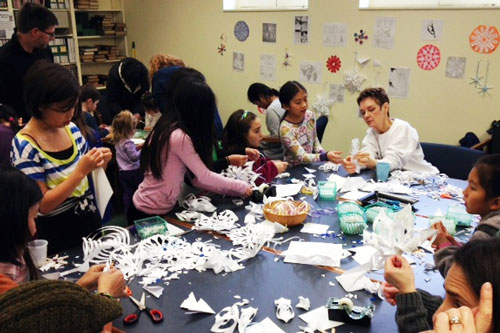 Today seems like an appropriate day to talk about snowflakes – not the ones that fell outside, but the nearly 100 paper snowflakes made by Southborough residents that are now on display at local businesses.

The snowflakes, which were made at an event at the Southborough Library last month, were intended for students at Sandy Hook Elementary School as part of the Connecticut PTSA’s Snowflakes for Sandy Hook drive. Before the snowflakes could be sent to Connecticut, the PTSA canceled the drive due to the overwhelming response.

Lanting Huang-Truong, owner of Bigelow Center for the Arts, arranged the snowflake-making effort and didn’t want the creations to to go waste, so she contacted local businesses and non-profits to find a new home for them. Turns out it wasn’t easy.

In a comment on this blog, Huang-Truong said she contacted several area hospitals and medical groups to see if they would take the snowflakes, but they declined. “They are concerned about the fire hazard. Because the snowflakes are made of paper, it is not going to pass the fire code,” she wrote.

Instead Huang-Truong approached local businesses, and there she met with more success. Displays of the Southborough snowflakes can now be found at Stop and Shop in Westborough, at the Acacia Functions office also in Westborough, and at Realty Direct Metrowest. Huang-Truong said some of the snowflakes are also displayed in her studio at the Bigelow Center for the Arts.

Check out photos of the snowflake displays on the Bigelow Center for the Arts website. 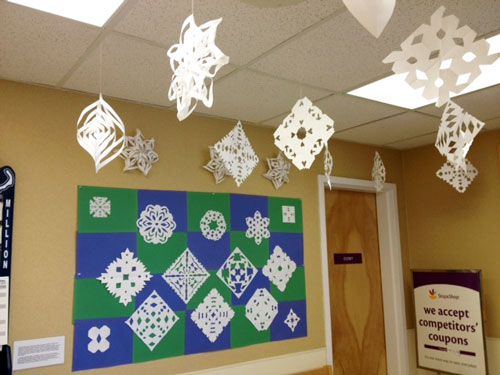 Above: Snowflakes hanging at Stop and Shop in Westborough (contributed photo)