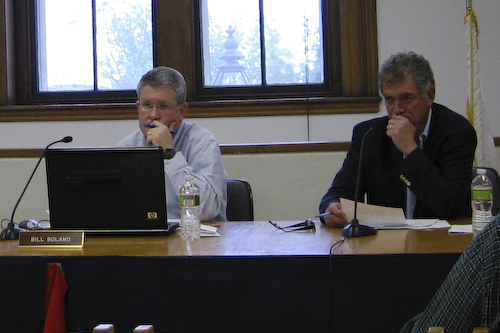 Above: Selectman John Rooney (right) with fellow Selectman Bill Boland at a board meeting in 2010

Chairman John Rooney’s 3-year term as selectman is up this year. I asked him last week if he intends to run for re-election. His answer? A definite maybe.

After comments he made at Town Meeting last April suggested he planned to be a one-term selectman, the Metrowest Daily News checked with Rooney who at the time confirmed he had no plans to seek re-election. But as of last week, Rooney was leaving the door open for another run.

While he called his time in office “a great experience,” Rooney said his main concern about another term is the time commitment. “It takes an enormous amount of time,” he said.

Over the past year, the Board of Selectmen has made a concerted effort to empower new Town Administrator Mark Purple with additional authority. Rooney acknowledged that offloading some of the board’s responsibility to Purple will likely make the job of selectman less onerous in the future.

As an example, Rooney cited the work Purple has already done on the FY14 budget. Purple presented a preliminary version of the budget at a meeting last week. “It would have taken (the board) six weeks to get to where we are tonight,” Rooney said after the presentation.

Throughout his term, Rooney has been outspoken in his efforts to improve town operations, with sometimes controversial results. Notably, Rooney has been a strong proponent of moving to a pay-as-you-throw system at the Transfer Station. Last year he challenged the school committee over school performance. And then, of course, there was the Swap Shop.

Rooney said whether he runs again may be influenced by who else pulls papers in the election. If a candidate he feels he can throw his support behind enters the race, Rooney said he may decide one term is enough.

Ultimately, Rooney said it’s not entirely up to him whether he runs again or not. “It’s a family decision,” he said.

Nomination papers for the town election in May are now available at the Town Clerk’s office. Candidates have until March 22 to pull papers.

Is lobbying your family permissible? And thanks for your service whatever your decision.

I did not know, until the last past election, I crossed party lines when I voted for Mr. Rooney the first time – more then happy to do it again. Maybe if re-elected he could get a complete set of answers from the school committee – OK probably not, but I can dream.

NOOOO!! You have to run again. The voice of reason. Then after another term you run for a state level office.

I agree with the above comments. I have watched every meeting on television and would recommend others do the same. They don’t drag on like they used to, and things acutally happen and get decided. Selectman Rooney is always fully prepared, listens to all of the information, and makes a decision. For too long this town has put off things year after year. He is willing to take on the tough and nonpopular issues and I always come away nowing where he stands on something. I dont always agree with every decision he makes but at least I know where he stands and why. I have also seen him listen to opposing views and not be afraid to change his opinion if he thinks he is doing the right thing for the town. It is really a refreshing view of how government should work. I would encourage everyone to watch these meetings.

I have to add to the comments above by stating that I hope Mr. Rooney does choose to run again this year. I didn’t vote for him when he ran three years ago. I was skeptical about his prior involvement with the town and his reasons for running. But after three years, I think he has done an exceptional job. He keeps a proper and professional distance from town employees and “regulars,” maintaining his objectivity and enabling him to act in the best interests of the Town and its residents. He does his homework, listens to opposing viewpoints and does not seem to play favorites or ally himself with any particular group or affiliation. I respect him tremendously and feel that our Town has benefitted from his service.