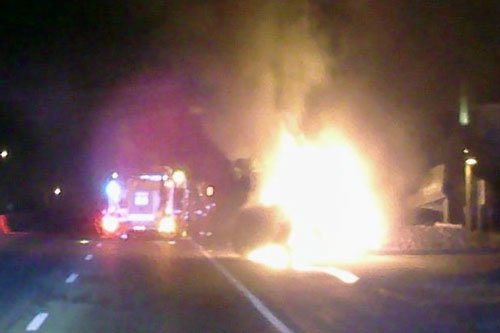 Above: A car engulged in flames on Route 9 this morning (photo via SPD)

Southborough emergency responders handled a fiery car crash early this morning when a Mercedes slammed into a large rock wall at 30 Turnpike Road (just past Red Barn Coffee route 9 eastbound). Here are all the details from the Southborough Police Department Facebook page:

Shortly after the officer’s arrival, they observed that the vehicle was leaking fluid and flames were beginning to fan out from underneath the vehicle. Officers pulled the driver from the vehicle and pulled back from the scene.

Traffic heading eastbound on Route 9 was stopped with the assistance of Framingham Police, and soon after pulling back from the scene- the vehicle (a Mercedes GLK 350) became fully engulfed in flames. Southborough Fire Department had been called to the scene, and the fire was extinguished shortly after their arrival.

The operator of the vehicle, Elisabeth Donaher of Livoli Road in Framingham, MA., was placed under arrest for Operating a Motor Vehicle while under the Influence of an Intoxicating Liquor (OUI Alcohol).