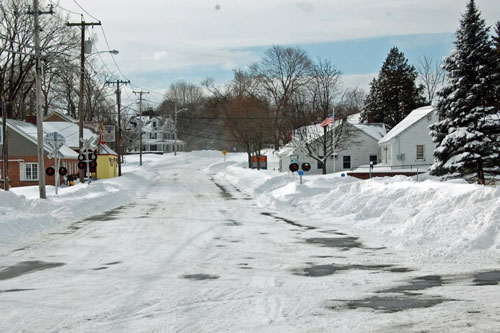 Above: Downtown Southborough after the snow stopped (photo by Nancy McAndrews)

Last weekend’s blizzard delivered more snow than Southborough had seen in quite a while, but officials said this week the town’s emergency responders and public works employees did an admirable job managing the storm.

At the Board of Selectmen meeting on Tuesday, Town Administrator Mark Purple commended the public works department for doing “a great job of keeping our roads clean and safe and passable.”

He also called out Lt. Neal Aspesi, Southborough’s Emergency Management Director, for his preparation and coordination of the emergency response effort.

“They prepare for these storms and they handled everything really well,” Purple said. “It was a fairly historic snowstorm, but our crew was up to the challenge.”

The blizzard dropped at least 25 inches of snow in town over the course of about 24 hours. Governor Deval Patrick issued a statewide driving ban during the storm to allow plows time to clear the streets.

I really meant to call Karen Gillagan, the head of our DPW this week and I never did but I will. THis town does a fantastic job. Really, the one place , I guess, I dont mind paying the $950 check for the new vehicle Excise Tax I just paid the town. I wish some of the surrounding towns like Marlboro put their excise tax money back into the streets as they collect so much in the excise tax road tax. Good job DPW, I like the way you are training the new peolpe as well as some of the older people retire.