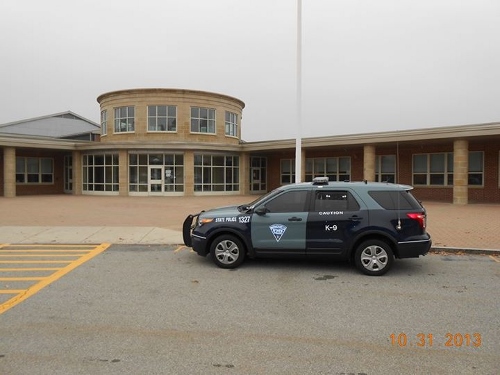 I can’t always find time to cover all town news in full. Here are the recent headlines from news about Southborough and ARHS that I haven’t had a chance to share.

According to a motion argued Thursday by the attorney for Daniel Goichman in Worcester Superior Court, Southborough Police received the initial tip in February 2012 that led to Goichman’s arrest by state police in September 2012. (read more)

Police shared the good news on their facebook page:

Drug Sweep Day at Algonquin Regional High School! At 9:30 a.m. this morning, State Troopers and Northborough Police Officers arrived at Algonquin for an unannounced drug sweep. State Police K-9’s searched the building and parking lots. NO ILLEGAL DRUGS WERE LOCATED! Congratulations to the Algonquin students for making the right choices and helping us to keep the campus safe.

Below are pictures they shared from the search.

NPD posted: "Even the locker rooms were searched, after a staff member ensured the area was clear of students." (Photo from Northborough Police Dept's facebook page)