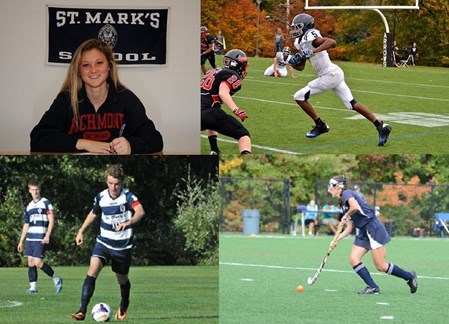 Above: St. Mark’s School is proud of their students’ athletic achievements this year.
(Contributed Photo)

St. Mark’s School asked me to share some of their news on students’ athletic honors.

While at it, I’ve rounded up some of their noteworthy stories from the past couple of months. Here are the headlines:

After graduating from St. Mark’s, Mr. Bradlee entered Harvard, but he took time off from his studies to serve as a Naval officer during World War II. He subsequently became a journalist, perhaps “the most respected newsman of his generation,” according to White House press office. . .

Ben Bradlee served as a Trustee of St. Mark’s from 1965-1971, and he was a frequent visitor and speaker on campus during his time at the [Washington] Post. (read more)

Mackintire was also voted both St. Mark’s MVP and overall MVP for the ISL this fall. In 2012 she helped St. Mark’s Varsity field hockey win both the ISL and NEPSAC championships. Mackintire has led the St. Mark’s team in scoring for three straight seasons, and is a three-time ISL All-Star. She has been named to three consecutive NEPSAC All-Tournament teams , and was also recognized as the Tournament’s Most Valuable Player in 2012. She has now received that honor again, in 2013.

Fifth Former Aaron McLean was named to the All-New England Class C football team. This is a rare honor for a St. Marker—McLean is only the second SM player so recognized over the last decade—and especially so for a junior. McLean led St. Mark’s in receiving this year and he led the entire ISL in touchdown receptions with 10, earning All-ISL status.

Sam Ward ’14 was recently selected by the Massachusetts Soccer Coaches’ Association to the 2013 Massachusetts All-State Soccer team. This is the second consecutive All-State recognition for Ward, a rare honor indeed. This past fall, Ward was again an All-ISL selection and the MVP of an outstanding boys’ varsity soccer squad, helping the team achieve its best record in almost twenty years. (read more)

The Festival of Lessons & Carols is a service that date backs to 1880 in the Anglican communion, and it became a fixture in the Episcopal Church in the early 20th century. At St. Mark’s, a service of Lessons & Carols was first presented seventy years ago, and the tradition continues to this day. The Sunday service was open to the public, while the Tuesday evening service was for students and faculty. (read more)