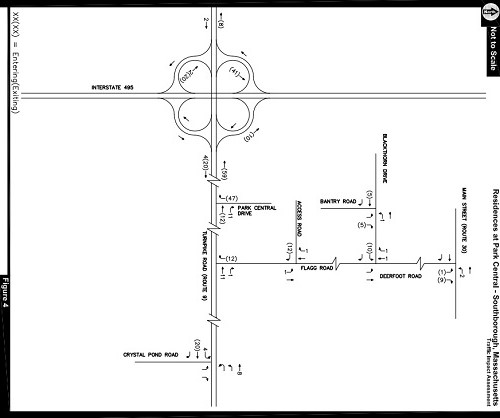 Above: (Click here to enlarge) New projections for week day morning “peak hour” traffic that would be generated by the Park Central development. (Image from page 19 of report on town website.)

A public hearing on the proposed 40B development at Park Central is scheduled for tonight. Yesterday afternoon, the town tweeted news that the hearing will cover an updated Traffic Study.

In the past, many residents complained that the earlier traffic studies were insufficient or inaccurate. The new study, dated May 19th, is by a new consultant for Capital Group Properties. (Click here to see it.)

Though titled as a “Second Study”, it is in fact the third version presented on behalf of the developer.

At the time of completion of [the previous consultant’s] study, access/egress for the project was proposed solely via Tara Road and Bantry Road. The access and egress configuration has since been revised to reduce traffic impacts on the surrounding residential neighborhoods.

Residents had been up in arms about the earlier version directing traffic through Tara and Bantry roads to Blackthorn Drive, then connecting to Flagg Road. However, that was an “update” released in June 2013.

Two months previously, the original traffic study directed traffic “via both the existing Park Central Drive and a proposed new link from Flagg Road into the site.” That study didn’t make any references to Tara or Bantry roads.

The June update was pitched by the developer as a response to negative reactions of the surrounding neighborhood. At the time that time, Selectman Bill Boland reacted:

To be blunt, I think this proposal almost looks like, ‘Well no one will buy this, so this is a better chance to get what we had in the first place’.

The new study’s recommendation is to include the Tara/Bantry neighborhood as secondary access:

The assessment by Capital Group Properties’ new consultants projects increased traffic and analyzes crash data. According to their figures, most of the traffic increase would be from Flagg Road to Rte. 9.

The consultants’ conclusion supports the development:

the traffic generated by the proposed Residences at Park Central residential development can be reasonably accommodated along the existing street system with implementation of the recommended improvements at intersections along Turnpike Road (Route 9). The minor increase in delay at the remaining study area intersections resulting from the development does not warrant any additional project-specific mitigation.

In March, the Zoning Board of Appeals stated that they would hire a peer review consultant to evaluate the sufficiency of the developer’s earlier traffic studies. The consultant would be picked by the board, though the fees would be paid by the developer.

This “second study” does not appear to be that peer review. It is described as a new “Traffic Impact and Access Study”.

Less than two weeks after the March hearing, the ZBA voted to deny the project permit. Tonight is the ZBA’s first hearing on the 40B since that denial was overruled by the state.

The ZBA meeting opens at 7:00 pm in the Town House Hearing Room. The hearing is slated for 9:00 pm. (Click here for their agenda. More materials related to the development are available on the town website.)