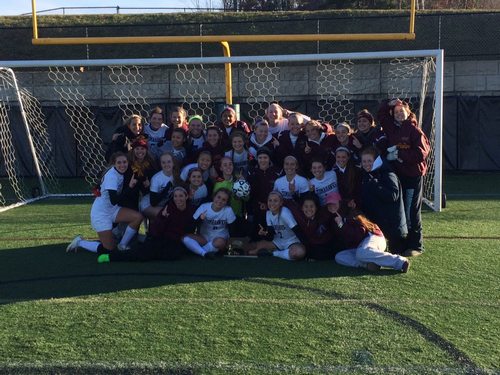 Above: Girls Soccer has a division title under their belts and are headed for state semi-finals. (Photo proudly tweeted by ARHS Athletics)

Algonquin Girls Soccer will compete in state semi-finals this week. Getting there required beating Wachusett Regional out for the Division 1 Central MA title.

When the Algonquin Regional High girls’ varsity soccer team reeled off 16 consecutive wins to open the 2015 season, few players, coaches and team supporters could have doubted that this would be a more than special campaign for the Tomahawk girls. The team had not captured the Division 1 Central Mass. crown since 2009, but this squad appeared to be launching an inexorable run at the coveted title.

It all came together just as hoped, but was not easy as top-seed Algonquin was forced to play comeback kids in prevailing, 3-2, versus host third-seed Wachusett Regional when the teams clashed Nov. 14. (read more)

Tomorrow night, the team heads to Westfield State University for the state semi-finals at 6:00 pm. They’ll be pitted against Western champs, Minnechaug.

I just learned of another team vying for a state title – Algonquin’s Cheerleaders. The squad came in fourth at the Central/West Regionals yesterday. They will host and compete in the state competition on Sunday, November 22.

Girls Cross Country came in 5th out of 17 teams in their Central MA tournament, while Boys came in 7 out of 21.

ARHS Football crushed Fitchburg, 34-6, in their non-tournament game. Their last hurrah will be next week. With a 7-3 winning season, they’ll be confident going into the Thanksgiving Day game vs rivals Westborough with a 2-8 record.