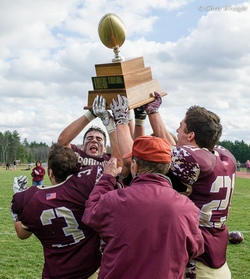 No surprise, Algonquin Football went out in glory in their last game of the season.

The boys beat Westborough, their traditional Thanksgiving Day rivals, 41-0 to keep the trophy.

Though not rewarded with a slot in the tournaments, the team has had a great year.

After losing their first two games, they went on to win all but one of their remaining games. According to the Telegram, it’s the first time they’ve won eight games since 1987.

Congrats to all the players and the coaching staff. I was a little leery when Coach McKay took the reigns but I clearly understand what he was doing now and it is tremendous. Where I really was able to see a difference this year was in the actual muscle mass developed through the coaching staffs strength and conditioning. Also, the positive reinforcement a coach can bring to the overall atmosphere of a program and kudos to the staff. Kudos to all the kids at ARHS. Great school with great overall impact on our kids.