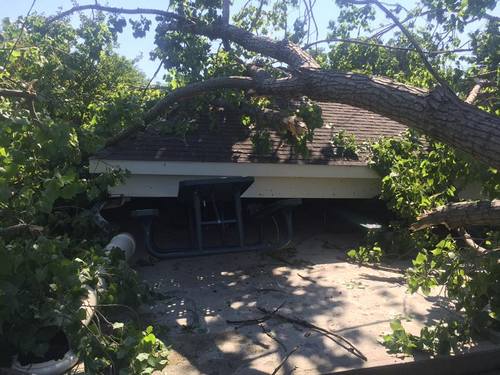 Above: The pavilion roof at Fayville playground is providing more (or less) “shelter” than intended after Friday’s storm. (photo posted to My Southborough on Facebook by Michael Middleton)

Friday’s severe storm thankfully didn’t cause any severe injuries – at least to humans. But some in town are still dealing with the damage. That includes the Recreation Department.

As shared on my Facebook page Saturday, the pavilion was crushed at Harold E. Fay Memorial Field & Playground (a.k.a. Fayville playground on Central Street). For those unfamiliar, the spot is a covered area, shading picnic tables.

I followed up with Rec Director Doreen Ferguson. She told me that the Town would be filing an insurance claim. Next, they need to decide how to deal with a rebuild in context of playground renovation plans.

Originally, the structure was going to remain where it is. But now that it needs to be rebuilt anyway, that may change. (Southborough Wicked Local got more context – plus news that the play area is closed for now. You can read that story here.)

One woman posted her dismay over the destruction of the pavilion. It was refurbished just last year as her son’s Eagle Scout project. Another shared her story of how the crushing of the structure was almost a tragedy. Her family sought shelter under the pavilion at the start of the storm. Fortunately, they had driven there and ran to the car when branches started flying.

For a better look at the destruction, click thumbnails below:

The entire area has been cleared — the pavilion, toddler playground, and main playground. Does anyone know the schedule for replacement and the plans?

I have been trying to get an update. I hope to be able to share news soon

I am working with a group of parents on finale design. Install is scheduled to be completed mid to late summer 2017.