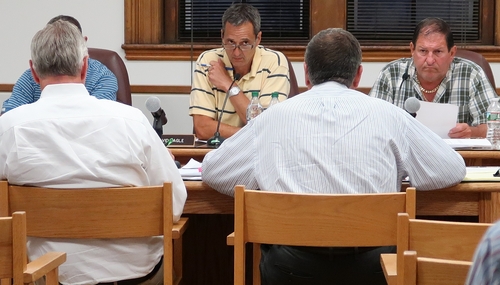 Above: Bartolini (on right) and other ZBA members working through conditions to their controversial Park Central decision in August. (photo by Allan Bezanson)

For the second time this year, residents submitted a petition asking the Town to remove Leo Bartolini from the Zoning Board of Appeals.

The new petition covers much of the same ground as the July petition calling to oust then-Chair Bartolini. Again, there are raised doubts of the ZBA member’s concern for public safety and welfare. But the bulk of accusations and evidence address his “temperament”.

Multiple incidents and complaints call out Bartolini as disrespectful treatment of residents. This time the petition includes a charge of sexist behavior. In an August 8th meeting of the ZBA, resident Carrie J. Deblois-Mello made a public comment about Park Central. Bartolini followed up by remarking “as far as what the girl said.”

In a letter to selectmen, 35-year old Deblois-Mello wrote that she found it disrespectful and doubted that Bartolini would address a male her age as a boy.

After the first petition, selectmen discussed the issue in closed session with Bartolini. Afterwards, they announced that Bartolini offered to step down from the position of Chair, but not off the board. In other BOS discussions about term limits, selectmen have indicated that they are unsure they have the power to remove appointees before their terms expire.

As for Bartolini’s willingness to resign, that seems unlikely. When the board was reorganized as a result of the first petition, Bartolini attempted to become a secondary chair for the ZBA, to fill in when the new chair is unavailable. (That didn’t happen. Town Counsel firmly reminded him that position isn’t real. Instead, the Chair appoints a pro tem as needed.)

Subsequently, the former chair sought the Clerk position on the board. But that didn’t pass when the new chair, Andrew Dennington, failed to support the motion.

The new petition asking Bartolini to be removed “effective immediately” was signed by 144 residents. The petition states:

We appreciate the Selectmen’s first step of removal of Mr. Bartolini as chairman of the ZBA, but we continue believe that Mr. Bartolini’s ongoing failings as a ZBA member confirm that he is unfit for a position on the ZBA and warrant his complete removal from the ZBA – and we strongly urge the Selectmen to act on this as soon as possible.

Many residents have been riled up lately over the ZBA’s handling of the Park Central project – most of it under Bartolini and all of it with his strong involvement. But attached documents date the issue back as far as 2010, when Bartolini was accused of disrespectful behavior. His letter of “apology” defended himself as justified in most of his behavior, only acknowledging that one comment was inappropriate.

The petition also accuses Bartolini of not having the firm grasp on rules, regs and procedures that he asserts to. They point to ongoing erroneous statements being corrected by Town Counsel and others. Accusations also include alleged missteps and failure to adhere to common sense and even required protocols.

To review the full petition and documents, click here.

On Tuesday evening, the Board of Selectmen will interview candidates for the ZBA and likely vote. That vote is to fill the vacancy left by David Eagle the day after the board’s Park Central approval.

“Any member may be removed for cause by the appointing authority upon written charges and after a public hearing.”

TO just saying : the quicker the better, Mark Dassoni .

Selectmen are unsure they have the power to remove a committee member they appointed? Well, hmm…ok, but let’s button down that authority moving forward. How do we go about that?

Hope they are successful…he is an embarrassment to the town. Consistently condescending to residents, but not to developers. At times, he is downright nasty to the citizens. There is no place for this kind of behavior on a committee as important as the ZBA.

He the Donald Trump of appointed officials ,Mark Dassoni .

They know darn well they can remove him. How incompetent is our board? Or is it some other reason for not acting? I really don’t like beating these guys up, but the recent performance has been just terrible. Not to mention town counsel. Straight horrible~! We are now dealing with years of absolute mismanagement of Southborough. That, I think, is undeniable.

If you are really unhappy with the direction of Town Government the find someone to run for the BOS who is more in line with your goals or run yourself. There are 2 seats up in the Spring.

Just went through from 2007 til July 2016 selectmen appointment of Mr. Bartolini , in them were complaints of conduct, disrespecting citizens , lack of attention by facial expressions , he definitely is not board member listener ,according to what I read he should have been voted off ZBA before 2014 ,now as of then is apparent he hurting town credibility to be a appointed official ,so with that as a outsider I see selectmen needs to do something to save your own faces in front of your voting tax payers which needs you now more than ever, Mark Dassoni .

To all the complainers the question must be asked, why not step and serve. It is easy complaining, not so much serving.

Oh boy, turning into a real witch hunt now. Since when cant you all take a few maybe unpolitically correct words from a man? Seems light in the shoes to me. If he is the only one against you, he will not stand right. He does serve a purpose, and so do the others. You dont want more houses, your got yours right? The developer does, and the developer has that right as property owner. Oh maybe you will pay the fair market value for the property so the developer gets to stop paying taxes to finance your little kiddies education? I dont thinks so, you want it both ways. Too many cry babies today.

“Since when can’t you all take a few maybe unpolitically correct words from a man?”

Really? That’s the best defense out there? I can take all of the unpolitically correct words anyone wants to throw at me. However, I neither expect nor will tolerate that from appointed government officials hired to serve me.

Speaking of politically correct, the term “light in the shoes” (or loafers) is a gay slur. Now maybe I understand why you support the man.

I don’t have a dog in this fight and am not defending the behavior but please remember that no one on the ZBA was “hired” they serve as volunteers.

I suspect that one of the reasons why the BOS may be reluctant to take aggressive action is that it is hard to get people to serve on the various volunteer boards and dismissing members is not a good recruiting tactic.

How many competent high functioning adults do you know that would want to serve on a volunteer board or committee on which such poor behavior appears to be accepted?

Good news selectmen are focusing on Flagg rd. hopefully not bad news no discussion on the ZBA citizens petition to oust Mr. Bartolini , yet they are against citizens variance warrant, tell”s that both ZBA and Selectmen are not hearing voters cries for help and that is sad to know ,to the citizens your voice is not being taken seriously enough by electives ,electives and ZBA are so blind that they will not see, citizens make them see other there own sights, fight on for your voting, taxing rights ,you all deserve better than status quo. Mark Dassoni

McGee, did not know that term meant that but I’m certain people who worry about it all the time know every little nuance. I am 59 years old now and we used the term when I was in high school for people who are too sensitive. At that time I knew no homosexuals or lesbians. Nor did we care really. It wasn’t an issue. Seems like everything is An issue with people who are too sensitive today. BTW , I’m very good friends with these folks in my neighborhood – are you?

I’m 53 and was able to evolve with the times instead of blaming being raised in “the good old days” for being insensitive, so you don’t need to lump me in with some other generation to make yourself feel better for being a dinosaur.

Wow, I have to ask this question, why are liberals so quick to call names when they have no ideas worth listening to? You’re so mean spirited. Did you hear Timmy Kaine the other night? He looked like a spoiled little boy stamping his feet in the real me in the room Pence, he had ideas as well as integrity without lies. I really do hope that liberal America can get beyond the blame and the name-calling that liberals exemplify so well. Why don’t you come to my house the next Saturday morning I have a men’s group and see all the different shades of humanity. Do you really have those friendships?

Ahhh…what a shocker…a Trump supporter. God it’s funny to see you guys jumping all over Kaine, but ignoring Trump’s long and public history of petulance and narcissism. “Liberal this…liberal that”…blah blah blah. Thanks for the invite to your right wing men’s group, but I think I’d rather have a root canal than listen to a bunch of reactionaries long for the good old days of Bush II and Cheney.