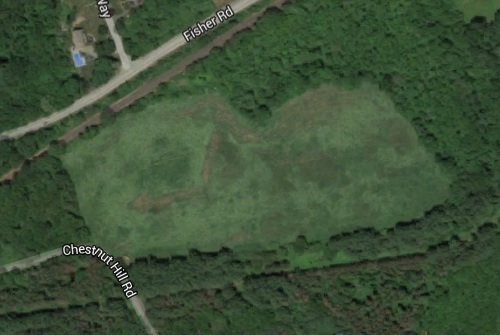 Above: Former farmland off Chestnut Hill Road is the proposed site for a dozen new homes. (image from Google maps)

On Monday, the Planning Board will hold another hearing on Chestnut Meadows – a proposed 12-house subdivision on 15.75 acres.

Although I have highlighted some hearings in “The Week in Government” posts – I’ve neglected to explain to readers what Chestnut Meadows is.

The land formerly was part of our town’s largest farm and owned by the first settlers on what would become Southborough.*  It is in an area that was prioritized by the Town’s Open Space and Recreatio plan for preservation. But, in fall of 2015, the public learned that the parcel had been quietly slipped out of 61A status over a year before.

By the time some officials learned about an imminent sale, the Town had already lost the right of first refusal on a purchase.

At that time, an attorney for developers purchasing the land broached possible development options with the Planning Board. That initial discussion covered two potential plans – one that would have sited up to 16 homes. When developers returned this spring, it was with the lesser proposal for 12 houses.

Several Planning Board hearings have been held, beginning in May, on the proposed development. Recently, Southborough Wicked Local covered one of them:

The town has spent years trying to preserve land along Chestnut Hill Road, but the owner of 15.7 acres near the end of the one-way street wants to build a subdivision with 12 homes. The land to be developed is known as Johnson Farm. (read more)

The next hearing will be held on Monday at 8:00 pm in the Town House Hearing Room.

*Historic facts about the farm are from a 2014 column by Donna McDaniel.

It is sad to see this land used this way. It would be nice if it could be left as is.

Does anyone know if the Town and/or Open Space or Conservation Comm. tracks property under Chapter 61A status? Was it an oversight that the ROFR wasn’t exercised within the allotted time frame, or was it a deliberate decision on the part of the Town not to exercise the right after assessing the options? There seems to be a pattern of controversial issues in our Town that are a result of being reactive instead of proactive.

Based on the discussion last fall – this one appeared to have slipped through the cracks vs being on purpose. I don’t know if committees/departments worked out since then a way of tracking the status.

This parcel did not slip through any cracks. We simply did not target it for purchase in time.

There is a myth in this town that, just because a parcel is in Ch 61A tax status. (allowing the propertv owner to pay less taxes if the owner keeps it as open space), that the town has the perpetual “right of first refusal” to buy the land, IF the owner puts it up for sale.

That is ONLY the case while the property remains in 61A.

But if the owner is smart, and most are, or their lawyers are, then they know that simply:

1. Removing the land from 61A status.

2. Paying the full taxes due for the past 5 years.

3. Then waiting one full year.

They now have legally canceled the Town’s “right of first refusal”, and therefore they can now sell to anyone, at anytime, at any price, without the Town even knowing about the sale.

There is, and always has been, only ONE way for a Town to buy open space which the town wants to remain as open space ….. and that is to prioritize the parcels which the Town wants to preserve forever ……. Get thecvonsent and money from Town Meeting, and then approach the land owner, and strike a deal.

The Town cannot use eminent domain. It must simply pay the asking price or negotiate a better deal, The Town can never force a deal through without the sellers consent.

Therefore Southborough, you had better wake up and decide what our priorities are in terms of purchasing and preserving open space.

This only goes to show how incredibly lucky the Town was that St Mark’s School offered to sell us the golf course at a very good price. Note that St Mark’s could have legally removed the golf course from Ch 61A, paid 5 years back taxes, waited a year, and then sold it for millions more than the Town could afford. We were very lucky, and still are, to have St Marks and Fay in our town center. Without them, this town would have been developed decades ago, with the usual commercial sprawl we see all around us.

Your statement “We simply did not target it for purchase in time” sounds like the perfect place to use the statement “it slipped through the cracks”. Then you go on to say we are lucky to have St Marks and Fay schools as they have kept commercial business away. In a previous blog you wanted the poles moved so it would invite businesses. Not sure what direction you want us to go.

Just to be clear, the town can use eminent domain to take land. It must, however, pay a “fair market price”. Eminent domain is a difficult and in my opinion an odious process but it is a club that is available.

I for one, believe that it is a mistake to use “permanent” (there is no such thing as permanent) conservation restrictions on public or private lands. I believe this is an arrogant and condescending view of land preservation. Essentially we are telling future generations that we know better what their needs are than they do. I think this is a serious error. I trust the next generations to make good decisions about the uses of public spaces. I believe they will be at least as wise as we are and better able to know their own preferences than we could ever do.

Better that we should have time limited restrictions of 10 to 30 years that would allow future generations to reassess if the current uses of public spaces are still the best uses of the properties in question or whether some modifications to the terms of preservation would better serve their needs.