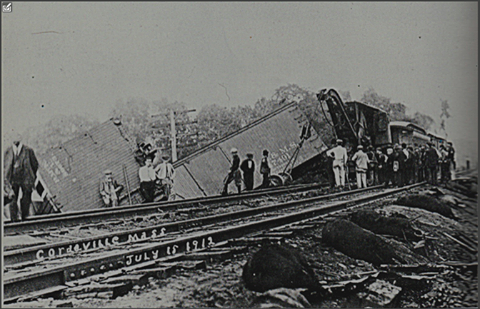 Last year, the Southborough Historical Society shared a fantastic bit of historic news on Facebook. I missed sharing it then. So, I’m sharing it now in time for tomorrow’s 105th anniversary.

A freight train which had just crossed the Ashland/Southboro border headed for Cordaville derailed. The engine and at least 2 cars completely left the tracks. Sadly, those 2 box cars were full of live pigs headed to the Deerfoot Farms slaughterhouse and quite a few of them were badly injured in the crash.

Once authorities got to the scene they immediately sent for the Deerfoot Farms “slaughterman” so he could put the badly injured pigs out of their misery. It was originally thought that the derailment was accidental but after investigating authorities discovered that someone had purposely caused that train to jump the tracks.

The next train scheduled to travel on those tracks was carrying a large amount of money headed for the post office and authorities believed that the later train was the actual target. They surmised that the plan was to derail the train and then steal the cash during all the confusion after the crash.

Unfortunately for the saboteurs and the pigs the wrong train was derailed.