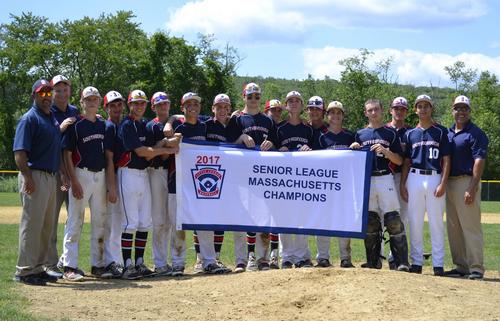 Over the weekend, Southborough Little League’s senior team became State Champions. The players battled Woburn for the title in a three game playoff.

On Saturday, Southborough swept the first game 11-0, but lost the second 5-4. They cinched the championship with a 5-2 win on Sunday. Below are photos of the team celebrating yesterday, shared by parents. (click thumbnails to enlarge).*

Now the players are preparing to travel to New Jersey to play in the East Regional Tournament. According to the Worcester Telegram, the tournament is July 20-26 and Southborough is scheduled to play New York on Thursday at 5:00 pm.

The Telegram captured the excitement and drama on both Saturday and Sunday. Check those stories out for the details and action pics from the games.

*For an even better look at the contributed photos, check out the full sized originals I posted to Facebook.

Updated (7/17/17 2:35 pm): I asked for and got some clarification on the tournament schedule. The tournament is double elimination. If they win on Thursday, they’ll play Maine at 2:00 pm on Friday. If not, they’ll get another shot to stay in the tournament on Saturday afternoon.

You can keep tabs on the schedule and outcomes here.