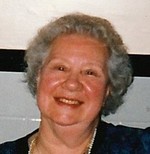 Laila Violet (Nykanen) Buchieri, 91, of Southborough passed away on Wednesday, July 19, 2017 at the Beaumont Rehabilitation & Skilled Nursing Center in Westborough. She was the beloved wife of the Manual Buchieri who passed away in 1985.

Born in Sault Ste. Marie, Ontario, Canada she was the daughter of the late Henry & Impi Nykanen predeceased by her husband

Laila spent most of her adult life in Southborough where she and Manual raised five sons. In her early years she worked as a Stenographer at the Sault Ste. Marie Steel Plant in Ontario, where she met her husband Manuel, who was guarding the Sault Ste. Marie locks early in World War II. She also worked at Hendries Frozen Foods in Southboro, former Zayre Corporation and TJX in Framingham, as well as the former Jordan Marsh at Shopper’s World in Framingham. Laila was an avid reader and a member of the Women’s Auxiliary at the VFW in Southborough She was a sweet, gentle and kind woman and was loved very much by her family, friends and all who met her. Her greatest joy was being around her family. She will be greatly missed.

She is predeceased by her sister Laura Grant and her brother Paul Nykanen of Canada; her sister-in-laws, Frances Spezzano of Brighton, Clara Bucchieri of So. Boston, and brother-in-law Salvatore Bucchieri of Rockland, ME.

Calling hours will be held on Monday, July 24, from 4 to 7PM, at Morris Funeral Home, 40 Main Street, Southborough.

A funeral service will be held on Tuesday, July 25, at 10 AM at Pilgrim Church, Common Street, Southborough. Burial will follow in the Southborough Rural Cemetery.

Memorial contributions may be sent in her memory to the charity of ones choice.

To leave words of condolence to the family, please visit morrisfuneralparlor.com