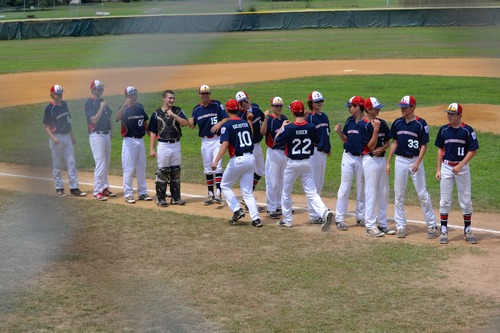 As I previously posted, Southborough Little League’s senior team qualified to compete in the East Regional Tournament by winning the State Championship. The team was part of a double elimination tournament that ended this weekend.

Although the boys were eliminated at the end of their second game, a parent shared that the journey was worth well worth it:

Everyone really made the most of the experience and they all appreciate how much they accomplished this spring and summer. And the boys made some lifetime memories in the process! The atmosphere all weekend was very upbeat and positive. The trip for the boys was a combination of playing baseball and having fun with their teammates. The team took in the Phillies game on Friday night. Losing at Regionals didn’t take away any of their prior achievements, they all just enjoyed the journey.

Here are some contributed pics from the team’s final game – Saturday afternoon vs East Vineland, NJ. (click thumbnails to enlarge and for details)

The games’ highlights were covered by Metrowest Daily News.

Massaglia will lose most of his current team as they will hit the age limit for Little League Baseball.

“It was really hard to say goodbye to them,” Massaglia said. “This year we were running all over everybody … but to coach these kids as long as I did, I’m content, although I wish it would never end. I feel lucky.”

On Saturday, they had one more chance to stay in if they could be New Jersey. Metrowest Daily News recaps:

Matt Walsh had two hits and pitched a solid inning but the Southboro Senior Little League team fell 18-2 to East Vineland, New Jersey in five innings in the East Regional Tournament in New Jersey on Saturday.

“We didn’t make any errors, but that team just hit it hard and where we weren’t all game long,” Southboro manager Pete Massaglia said. “I threw my three best pitchers at them and gave up 18 runs. They were a good hitting team today.”

*For an even better look at the contributed photos, check out the full sized originals I posted to Facebook.