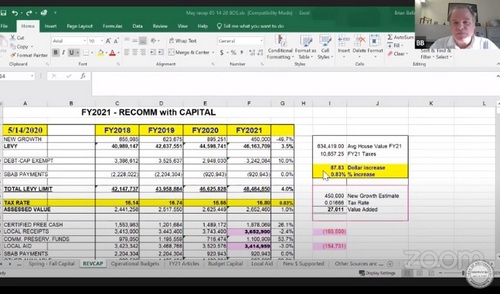 Above: Treasurer Brian Ballantine walked selectmen through a revised budget last night. The board is expected to vote on a final version next week. (cropped from video)

Last night, selectmen went through the budget for FY21 with the Finance Team. Figures were looking much more favorable than the last time they spoke. Selectmen were shown a budget that would come out at a projected 0.83% tax increase.

That figure includes capital requests to be made at a Fall Special Town Meeting. Town Administrator Mark Purple acknowledged that it doesn’t include if Fall meeting voters approve purchasing a parcel from National Grid.

The new figure, estimated at an extra $87.83 increase per average household isn’t final. Decisions made last night and more to be made this Tuesday will have impacts. Still, it’s clear that the increase will be significantly lower than the 3.43% previously projected.

Some credit for budget reductions was given to the Capital Committee for putting off some projects and shifting around how to handle or pay for others. Other credit was given to some boards that voted to reduce their budgets. Purple said that $600k worth of cuts being made by Southborough and Regional schools was a significant factor. He noted that in recent years the schools have been “coming in more reasonably than the Town has”, and this continues the trend.

Cuts were also made to Town budgets through an “exercise” recently requested by selectmen. Finance was asked to present revised budgets that cap tax increases at 0% or 2%. (That’s after accounting for projected lower revenues and state aid due to the changed economic situation.) Most Town departments were asked to participate effort, specifying to Finance what cuts they would make.

At the May 14th Board of Selectmen meeting, Treasurer Brian Ballantine described the 0% budget with its cuts to services as one he believed no one would support. While no one liked making cuts, he said that most department heads seemed to believe they could manage the 2% version of the budget.

Some departments had been exempted from the exercise due to small budgets that would have only netted $30-50 in savings. Some expense buckets are required or wouldn’t make sense to reduce (like debt payments). Last night, selectmen were asked to decide if they wanted to exempt additional departments or change their exempt status. The board unanimously supported exempting the Board of Health.

At Selectwoman Lisa Braccio’s request, selectmen will also consider exempting Police and Fire. Before they vote, they will get more details on those department’s proposed reductions. Braccio opined that the summary referring to cuts to training hours and overtime concerned her. Selectman Sam Stivers agreed, though he posited that the right figure might be in the middle.

Though not voted on yet, expect the Board to see on Tuesday a reduced version of their previously exempted $4,000 budget. Vice Chair Marty Healey indicated that even though the impact would be small, they should make cuts to their budget when asking others to. Braccio agreed.

A lot of time was spent debating decisions on previously approved new hires for FY21.

Healey said that pre-pandemic, department heads made compelling cases for new positions. Given that we are in the worst economy since the Depression, he now needs “beyond compelling”. Otherwise, he wants to see cuts elsewhere to offset.

Town Administrator Mark Purple again recommended the two Police officer positions selectmen approved be frozen to January. If local aid from the state is worse than projected, the positions could be cut before officers are hired. If they are hired, their cost will be “negligible” in FY21 as they would start as students in the Police Academy. And only 3/4 of their costs would hit the FY22 budget. Selectmen agreed the plan made sense. (Healey said he saw the freeze as a compromise.)

Purple was unsuccessful in persuading the board on recommendations about positions for the other two departments: Youth & Family Services and Technology.

The TA suggested eliminating SYFS’ full time position to be replaced by a part time position. Braccio referenced an Advisory Committee opinion that some hours could come from other departments not currently working at full capacity.

Stivers and Selectman Dan Kolenda both argued for the increased demand for SYFS due to the pandemic and the department’s opinion that a qualified full time employee was needed. They pushed for the full time position to start July 1st. In the end, the vote was 4-1 to support SYFS’ request. Healey was the dissenting vote.

Instead of a decrease or freeze, Purple sought to up the Technology Department’s original part time hire request. He explained that there is no backup or redundancy plan for IT Director Tom Laflamme. Given the increased need for technology and his belief that they could be going in and out of remote working for a while, he pushed for a full time employee or at least two part time people.

Stivers was willing to support one part time hire in July and another frozen to January. But Chair Brian Shea and Kolenda supported hiring only one part timer to start in July. The vote was 4-1 with Healey dissenting.

Earlier in the meeting Purple followed up on comments he had heard that some budgets had a built in advantage in the budget reducing exercise based on their new hire increases. He followed that wasn’t true since they didn’t cut those requests, instead looking to other expense reductions for savings.

Seems like everyone has been trying to do a good job here. With contractual salary COLA obligations to so many employees, a budget hike of less than 1% seems a job well done by all involved.
Defer capital where it makes sense and pay attention to those involved in our physical and mental health and well-being and safety.
That said, I’d still love to see us allocate a few dollars for more Transfer Station hours but I realize this is a windmill to tilt at another day(year)!

“Though not voted on yet, expect the Board to see on Tuesday a reduced version of their previously exempted $4,000 budget. Vice Chair Marty Healey indicated that even though the impact would be small, they should make cuts to their budget when asking others to. Braccio agreed.”

I had heard each of the BOS members are compensated a whopping $800 annually for their time. If one conservatively estimates each Board member spends 3 hours per week preparing for and attending meetings, this amounts to an impressive $5.13/hour.

The BOS SHOULD be exempt from a budget cut. For all of the work they perform, it is already ludicrous they’re only compensated a measly $800.

What percentage is $4000 out of the entire Town’s budget?

Make cuts where appropriate. No need for window dressing!

Haha seriously? $800 per year to members who most likely already have full time paying jobs. I’m fine with them not being paid at all.

I could be wrong and don’t have a source for this, but I’ve thought that the town pays officials these modest amounts to allow them to buy public official liability insurance riders.

But of course, in Southborough, no one would ever sue town officials. Wait, what!?