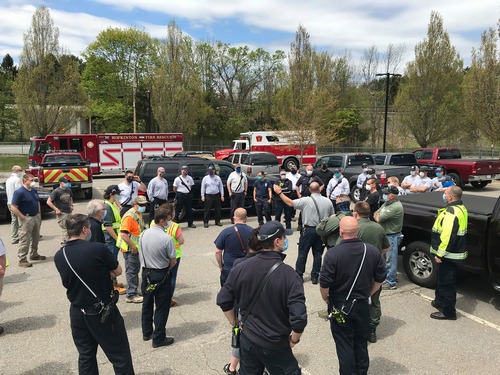 Above: Emergency responders gathered at the staging area for a coordinated search for a missing elderly woman yesterday. (image from SPD Facebook)

On Sunday afternoon, Town issued an alert about an elderly woman with dementia who was missing after wandering away from a home on Southwood Road. The alert was later updated to notify that she had been safely found.

Today’s press release shares that the woman suffers from advanced Alzheimer’s. It also outlines the actions and resources that what went into achieving the happy ending.

The report notes that the initial call was made at 10:51 am. Emergency responders arrived at 10:55 am and the “Under Control” report was made to dispatch at 1:06 pm. 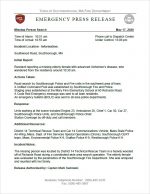 The missing person was located by District 14 Technical Rescue Team in a heavily wooded off of Richards Road during a coordinated wide area search operation. The elderly female was evaluated by the paramedics of the Southborough Fire Department. She was uninjured and reunited with her family.

I was unfamiliar with “District 14” so I googled it. Ashland’s Fire Department website describes:

We had an RFID installed in our dog when it was a puppy. If someone ever dognaps our dog, it can be located with that chip. Similar systems are used in automobiles. RFIDs have been used in the dairy industry for several years. It is popular in Sweden for humans.

Imagine how much simpler it would have been to locate this unfortunate woman had she been fitted with such a device. Would it really have be an invasion of her privacy? If nobody is actively caring for her, it could provide a safety/security net.

Look at all the uniforms and try to estimate the cost to the Town(s).

RFIDs don’t track lost or stolen dogs. The tags are only read if they are scanned by a veterinarian. (They don’t have a power source.)

Very impressive response and a job well done by all those first responders, both the professionals and the volunteers and the citizens who took the time to make the calls that helped in the fast resolution.
kudos to all of you…and thanks.