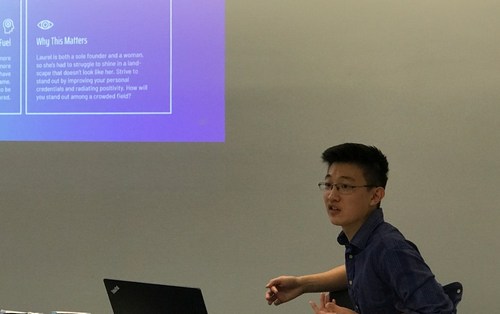 Above: Last fall, a Southborough high school student led a Library workshop based on the lessons he learned from interviewing over 50 CEOs and business founders. This spring, he was recognized as a National Merit Scholar. (image cropped from businesseswithstories.com)

What makes the recognition especially sweet, beyond the check it comes with, is the high bar required to get it. Only a small percent of students earn the title of Merit Scholar®. For the second year running, a Southborough resident was among them.

The scholars are winnowed down to less than 0.5% of the 1.6 million students that take the PSATs:

Last fall, the highest-scoring participants in each state, representing less than one percent of the nation’s high school seniors, were named Semifinalists on a state-representational basis. Only these 16,000 Semifinalists had an opportunity to continue in the competition.

According to a tweet, by ARHS in the fall, a number of Algonquin students were commended by the scholarship program. Only Zhang moved on to the semifinalist stage.

From the semifinalists, 15,000 move on to become finalists. 7,600 of those are selected to become winners. The names of scholars are released in four batches. Zhang was included in the second announcement, issued this month.

National Merit $2500 Scholarship winners are the Finalists in each state judged to have the strongest combination of accomplishments, skills, and potential for success in rigorous college studies. The number of winners named in each state is proportional to the state’s percentage of the nation’s graduating high school seniors.

These Scholars were selected by a committee of college admissions officers and high school counselors, who appraised a substantial amount of information submitted by both the Finalists and their high schools: the academic record, including difficulty level of subjects studied and grades earned; scores from the Preliminary SAT/National Merit Scholarship Qualifying Test (PSAT/NMSQT®); contributions and leadership in school and community activities; an essay written by the Finalist; and a recommendation written by a high school official. . .

Scholars may use their awards at any regionally accredited U.S. college or university.

Congratulations to Joseph and his parents for an amazing accomplishment!