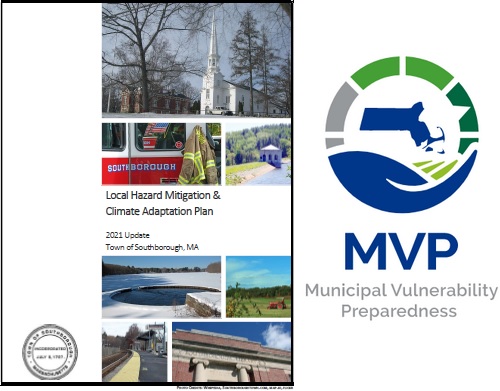 Above: This summer, FEMA approved Southborough’s Hazard Mitigation Plan. In related news, the Town has received state funding for more work on our Municipal Vulnerability Preparedness.

This morning, the Town of Southborough has issued a Request for Qualifications for GIS or planning firms. They are seeking help with a “Planimetric Impervious Mapping Project”. The contract will be partially funded by a state Municipal Vulnerability Preparedness (MVP) grant.

That reminds me that I’m behind on sharing related updates on the Town’s Climate Resiliency Planning.

The LHMP project was conducted in conjunction with the Town’s [MVP project], led by Conservation Agent Melissa Danza. Many of the LHMP Summary of Findings cross-walk with the MVP Summary of Findings, enhancing Southborough’s commitment to public safety and environmental conservation through hazard mitigation efforts and increased grant award potential.

It looks like the “potential” paid off. On Monday, the Community Advocate reported that Southborough received $22,875 for climate change resiliency projects.

The MVP Action Grant will be used to fund the mapping project:

The grant for Southborough will fund the town’s Planimetric Impervious Surface Mapping Project, allowing the town to identify surfaces that prevent water from seeping into the ground. When water can’t be absorbed like this, it can run off surfaces and potentially gather pollutants.

Southborough Conservation Agent and MVP Coordinator Melissa Danza said this work is particularly important in the areas around the Sudbury Reservoir and around the town’s wetlands resource areas. There, impervious surfaces could cause untreated discharge into the larger bodies of water.

“We are hoping to limit our impacts to the reservoir and to the hotspot flooding areas,” Danza said.

Danza said the goal of the project is to have a third party create a Geographic Information System (GIS) layer that would allow them to extract data and determine how many impervious surfaces exist per lot in town.

Danza also said that the Southborough Conservation Commission has recently begun sending monthly letters to new homeowners. As a result of this project, Danza said those letters would be able to include more information gained from the GIS layer.

“It will better let the homeowners and property owners of Southborough understand what our goals and actions are and what the downsides are to increased impervious surfaces,” Danza said.

Danza said the most common impervious surfaces in Southborough are roofs and asphalt parking spaces. As a result, the project will mainly count driveways, roadways, parking lots, homes and structures.

As for groundwork that went into the earlier steps, that was also supported by by grants. In Aspesi’s announcement explained:

The development of the LHMP was aided by the civil engineering firm Pare Corporation, which simultaneously also worked on the MVP. All costs associated with the LHMP update were funded through a matching (75/25) Hazard Mitigation Grant Program (HMGP) awarded to the Southborough Emergency Management Agency (SEMA) by FEMA. The 25% Southborough match was funded through an MVP project grant awarded to the Conservation Commission.

He shared links for those interested in learning more about the LHMP:

For those interested in learning more about/responding to the RFQ, the document reads:

Responses are due September 24th with hopes to have a vendor selected by September 29th. For the full details, click here.