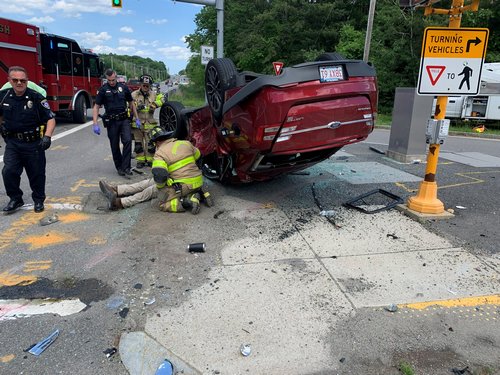 Above: One of the crashes in Southborough that the SFD has shared news about on Facebook this year was this one on Route 9 yesterday. (image from SFD Facebook page)

Yesterday, I read about the emergency response to a serious crash on Route 9 in Southborough. It was a reminder that I’m way overdue on updating readers about what the Southborough Fire Department has been up to. So I’m rounding up news they’ve shared that I’ve missed passing on to readers over the past several months.

On Monday, the SFD crews responded to a 2 car crash with a rollover at the Rte 9/Crystal Pond Road intersection. Five people were transported to the hospital for “moderate to serious injuries”. In late April, the SFD reported a 3 car crash at the Rte 9/Breakneck Hill Rd intersection. That one only resulted in one patient transported to the hospital with “non-life threatening injuries”.

Last month, a section of Parameter Road was closed for hours after a single car crash that took down a utility pole. According to the SFD the driver (without passengers) didn’t require medical treatment. It was the second time this spring. Fisher Road was temporarily shut down due to power wires around a “serious crash” in March.

Days prior, a driver was transported to the hospital for moderate injuries after crashing into a tree on Marlborough Rd. In April, a driver on 495 rolled over without hitting anything/anyone else. That crash resulted in”minor injuries” for the driver and two of the three passengers.

This year, the SFD also responded to small fire related incidents in Southborough.

In January, a truck’s brakes caught fire. Days later, a blocked chimney caused smoke from a fireplace to fill the attic (and could have led to a serious fire). Three months later, crews “quickly knocked down a dumpster fire on Cordaville Road” next to a house under construction. And two days after that, the SFD worked with Westborough Fire to put out a “small” fire in the woods just over the border behind Southwood Drive properties.

The Facebook page also shared three instances where they provided Mutual Aid by supporting neighboring departments with their firefighting/rescue efforts.

In April they assisted at fires in Marlborough and Hopkinton. In January, they aided Hopkinton in rescuing a hiker who had to be carried out of the woods due to a minor injury.

SFD personnel continually train to be prepared for emergencies. The department posted pics and details from five special trainings since I last posted. They trained on standpipe use (“common and vital” in warehouses), flashover training, emergency evacuations, and drafting (suctioning water into the pump).

Speaking of senior education, in February Lt. Dano and Firefighter/Paramedic Gaudette met with the Senior Center’s Dull Men’s Club to teach “10 Minute CPR”. (You can find details here, including how to schedule a similar training.)

Community support went both ways. The SFD asked residents to help them help us this winter by adopting a hydrant. They thanked volunteers for the successful effort, clearing hydrants blocked by snow to allow quicker response times.

In March, after 20 years serving as a Southborough Firefighter, Christopher Shanahan was promoted to Lieutenant. You can read the details here and see the photos from the ceremony here.

Later that month, a fledgling member of the team Tom Durkin received his permanent badge after completing his 1 year probationary program.

Ending on a bittersweet note, I found a post from February 4th. The SFD marked the first time they had two full time female firefighters working on the same shift – Brittaney Doane & Lisa Thompson. (As regular readers should recall, less than three months later the SFD posted the tragic news that Thompson died suddenly, due to an unsuspected medical condition.)