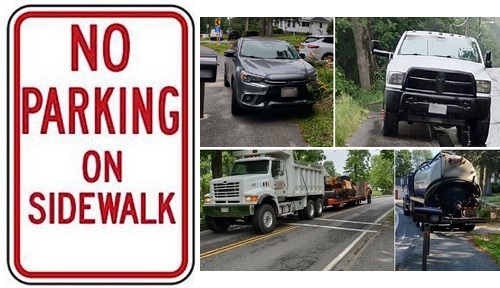 Above: The SPD has been warning drivers not to park on sidewalks, prompted by access concerns raised by a resident. The Acting Chief is also encouraging residents to report violations “at the time”. (images from Facebook and presentation by Tim Litt)

Two weeks ago, the Southborough Police Department issued a warning over Facebook about parking on sidewalks:

A reminder to all that parking on sidewalks and blocking the right-of-way for pedestrians is prohibited. Sidewalks need to remain available for the free flow of pedestrian traffic in town. Due to a recent string of complaints regarding vehicles parking on sidewalks; SPD officers have been directed to check for this type of activity throughout town and to make sure that the laws regarding illegal parking are being enforced. We will seek to remind, educate, warn, and fine (if necessary).

It is the policy of this department that police employees shall enforce parking regulations with reasonableness and impartiality in all areas of the community.

Please do your part by not parking and obstructing our sidewalks.

A presentation on sidewalk obstructions by Tim Litt points out that it’s not only parking that creates access issues. It includes a resident behavior that I never thought about before – placing trash barrels at the end of a driveway.

Litt brought the parking issue to Acting Police Chief Ryan Newell before making a presentation to the Southborough Public Access Committee on July 25th. Since that meeting wasn’t recorded, I followed up with him to get a copy of his presentation.

Litt informed me that in the meeting, he learned that the SPD had begun enforcing the parking violations. (He also learned that we do have a “parking clerk” –the Treasurer-Collector – and there is additional, relevant Mass General Law beyond those he referenced in his presentation.)

I reached out to Newell last week about the Facebook post and the actions the SPD is taking. I was seeking more clarity on the reference to “fine (if necessary)” and limitations on the fine amounts under old bylaws. Newell responded on the 4th:

If an officer shows up to a sidewalk obstruction complaint and the violator refuses to move their vehicle (when asked by the officer), the operator would then be issued a parking ticket. If the violator then continues to refuse to move- a supervisor may then authorize the vehicle to be towed from the sidewalk, if it is blocking the sidewalk and causing a hazard. Fining would also be for repeat offenders, who continuously park on the sidewalk. I have directed our officers to warn/educate violators at this time, when they show up or come across a violation. This would still require having the violator move their vehicle. There have been no fines issued, as of this date. There have been notifications made to violators (specifically some of those who were in the resident’s presentation to SPAC) that they are to cease parking and obstructing sidewalks- but, again, we are taking the education/warning route at this point in time.

During the SPAC meeting, I encouraged the resident to contact us at the time of the violation, so that officers can respond to the scene and speak to the violator at that time (and not have to try to locate the violator after the fact). It would make it easier for our officers and to educate/warn the violator. My officers have also been directed to perform some extra patrols in areas throughout town where these infractions are reportedly taking place

Newell shared the current parking ticket and relevant pages from the Towing Policy and Parking Enforcement Policy. The ticket indicates that parking on a sidewalk or crosswalk is currently fined at $15.

Litt’s presentation included several examples he captured in photos. While he had documented issues on the southside of town*,  He noted that he had heard reports from others that the issue exists in other areas of town.

Below I organized his photos into categories of concern that they highlight. The first two are vehicles parking on sidewalks or linked crosswalks. (Several were commercial vehicles. Other violators were presumably residents and/or their visitors.) [Note: I blurred the license plates and street addresses in the versions posted below.]

Litt’s presentation also demonstrates infrastructure issues beyond the scope of the SPD. Those include issues that SPAC has been seeking to have the Town address. Sidewalk issues are on the list of challenges the Town needs to address based on its ADA Self Evaluation report. Examples in the presentation were poorly placed utility poles, hydrants, and cables, plus sidewalks in disrepair and/or impacted by drainage issues.

Finally, photos show that actions taken by construction crews and residents can create access issues. I already mentioned the trash barrels. Others were caused by Public Works/construction crews.

The presentation pointed out that past surveys have shown that the public wants more sidewalks. Litt raises the question, why would we build more if the ones we have are obstructed or not maintained.

Enforcement was only part of what Litt urged for in the presentation. He encouraged the Town to take actions to educate the public about the importance of sidewalk access.

As for why the community should care, his presentation notes the obvious, “Every pedestrian – and everyone who loves one” with special concern for: Wheelchairs, walkers, crutches
Strollers, wheeled luggage, Visually impaired, Children – walking and riding, Elderly, and dog-walkers.

Plus, Litt notes that even those who don’t care directly about pedestrians have reason to care about the impacts of reduced safety. Motorists don’t want to hit pedestrians and taxpayers won’t want to pay for liabilities incurred.