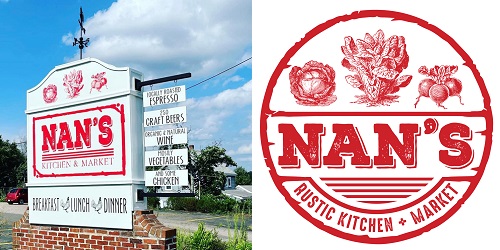 Above: Readers will be happy to hear that a new dining option in Southborough is opening in less than a week. (images from Facebook)

In February, the community was excited to hear that the spot vacated by Wendy’s on Route 9 (359 Turnpike Rd) would be occupied by an “elevated fast food” joint selling “fresh and wholesome food”. The successful Stow based business chose Southborough to open a second location.

As I wrote, though Nan’s is known for their chicken, their offerings cover a wider range of options including breakfast, lunch, dinner, dessert and coffee drinks. They also planned to sell bottles of craft beer and organic wine. (It seems that came through.)

In May, we learned that the business was targeting July to open, with timing dependent on receiving their alcohol license from the state. At that time, the owner clarified that the drive-thru area would only be used for curbside pickup of prepaid orders.

A recent Facebook post shows that the drive-thru will feature a mural by Southborough artist Patrick Steele.

Earlier this month, a story in the Boston Globe explained that one of the delays in opening the new restaurant was caused by challenges the owner faced when a state grant program proved too popular:

The state set aside $50 million to help hiring. The program was swamped. And now business owners are frustrated. . .

With the promise of a $4,000 grant per new employee from the new program, dubbed HireNow, [Nan’s owner Jordan Mackey] figured he’d get at least $150,000 to help pay for training for the 39 people he planned to bring on board to staff the new restaurant and two existing ones, a Nan’s in Stow and Sobre Mesa in Sudbury.

Instead, he found out he won’t get a single dime, even though he registered in April. Because the program requires new hires to stick around for 60 days, Mackey waited to upload his first batch of requests. Too late: The program was swamped and is now closed. Mackey said he was told it would last until the end of the year.

“This grant was going to help us move quicker and create more jobs, faster,” Mackey said. “Having these funds available to help with training was an unbelievable gift. [But] we just didn’t hear anything from anybody until it was, ‘Sorry, you’re out of luck, you’re not getting any money.’”

You can read the full story here.

Fortunately, the restaurant was able to hire, and is almost fully staffed. But when I spoke with Mackey this afternoon, he told me that those looking for work can assume the business is always hiring.

Jobs available include cooking jobs in their “from scratch” kitchen and part-time positions, some great for teens (including weekend-only shifts). To apply, click here.

Mackey described Monday’s opening as a soft one. The Grand Opening will be scheduled closer to October.

This month, the Planning Board and Zoning Board of Appeals each supported amending conditions for the permit allowing the old Wendy’s directional billboard to give drivers the 850 ft warning that the restaurant is up ahead on the right.