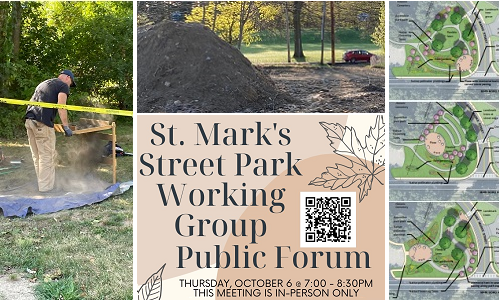 Above: A completed dig found no indication of old burials on the land next to the Library. Now, the Working Group is seeking public feedback on potential designs for the land. (left photo cropped from image contributed by St. Mark’s School, top center by Beth Melo, other images from Town materials)

[Updated (10/6/22 6:18 pm) I forgot to update this post earlier today when I learned that the forum was postponed and then postponed again. The new date is TBD.]

The Town is promoting a Public Hearing/Forum hosted by the St. Mark’s Street Working Group this Thursday. The public is invited to the in-person-only meeting to provide feedback on potential designs for the land. Those who can’t attend can pre-submit comments by noon on Wednesday.

For those who are less concerned about the design, and more focused on issues around land ownership, an update “on Proposed St. Mark’s School land swap” is on the agenda for Monday night’s Select Board meeting. The board will also be discussing the Citizen’s Petition to accept the park property as a donation from St. Mark’s School.

One issue the Working Group shouldn’t have to grapple with any longer is the potential for indigenous burials on the site. As I stated in a post last week, the archeological study was completed. No evidence was discovered indicating that graves had been dug within the defined park project area (and even beyond on abutting Library property).

The burials were just one frustration the public has expressed with the park project.

During their previously promoted forum on August 25th, Chair Marguerite Landry was frustrated that project issues dominated the public comments. (Scroll down for more on that.) Stating that many of the concerns were outside of her Group’s charge, she pointed residents to direct their concerns about project legalities, spending, and/or transparency to the Select Board. You can find the Board’s agenda for October 3rd, here.

This time, the Working Group will hope that the public focuses on the design elements.

Come review potential designs by VHB Landscape Architects & the priority list of design elements. We’d love your feedback to review at the meeting. Please send to Margarite at mlandry@southboroughma.com by 12:00 PM October 5th.

Potential designs and the priority list can be found here: https://bit.ly/3Cjm1TO

On the flyer, it notes that participation is only in-person, and there will be no recording.

The designs the Group will be discussing are three concepts that were presented at their August 25th meeting. Landscape designer Michael Kluchnan of VHB walked members through potential designs based on his prior discussions with them and a priority list the Group had submitted. He noted that any of the concepts could be adjusted or include elements from the others. He didn’t provide any cost estimates.

Each design includes several small, flowering trees and 4-5 “landmark trees”, spaced to allow full growth – though they would take years to approximate the size represented on the plans. Plans each also use rain gardens to help with drainage issues in the notoriously wet area. They also incorporate native pollinator gardens, ADA compliant paths, and a hardtop plaza.

The first design included a larger open field, the second a path that allowed for an amphitheater concept, and the third would border the paths with engraved stone that could include meaningful quotes, plus add carved out areas for benches.

In response to questions about whether any of the designs were more expensive to install or maintain, Kluchnan mainly referenced elements that could be scaled back or use less expensive materials. He also noted that some designs had larger garden areas which would require more work, or larger lawn spaces to be mowed. Open Space Conservation Commission representative Freddie Gillespie clarified that one of the benefits of using native plants is that don’t require a lot of work or watering.

Members were generally appreciative of the design concepts. But some were hesitant at pursuing preferences at that stage. Since the meeting was prior to the archeological dig, there was still the possibility that some or all of the land could have been “sacred” burial ground. [Note: I don’t have time to watch all of the more recent meetings for members’ full opinions.]

No members seemed clear on the point of or enthusiastic about the size of the hardtop plazas. Even for Library programs, Landry stated that the area that the Children’s Librarian pointed to as most likely to be used was a quieter sloped area nestled among the upper trees in Concept 1.

Some questions were raised about noise issues. Kluchnan said when he visited the park it was noisy when the occasional truck went past, but sound barriers wouldn’t be effective. The noise issue was one of the points later raised by resident Miroslav Dlouhy who questioned the concept of building a park on the site.

Historical Commission representative Kevin Miller raised an additional concern about maintenance of a future park beyond just the cost. He pointed out that Public Works hasn’t been able to keep up with the upkeep around the Old Burial Ground. (The Commission has publicly complained that they worry that tree limbs may fall on and break some of the old headstones.) He invited anyone interested to reach out to him, so he could personally show them the issues. He worried about creating an additional area the Town may not be able to maintain. (In their most recent meeting, Miller said he would be advocating for a “place of quiet remembrance with a good deal less clutter”.)

His upkeep question was reinforced by a later criticism from a a former landscape architect with 12 years of experience. Joanne Pearson implied that soliciting “pretty little concept plans” was a waste of money when the engineer wasn’t given a budget for park construction and “maintenance in perpetuity”.

None of the commenters in the last forum were interested in getting into specific design elements proposed. Their overall message was that the Town was wasting money. In the back and forth, members defended their motivations for serving on the Group and/or seeking improvements to the parcel.

Patricia Burns-Fiore was the first commenter, stressing the oft-echoed phrase of the night — the Town was “putting the cart before the horse” by spending on the concept plans. She pushed for answers her repeatedly raised public concerns that no one has answered why the Town is spending taxpayer dollars to build a park on privately owned land, and before the archeological study was done. (She raised the same ownership concerns at a recent Select Board meeting and was told to stay tuned for an update on October 3rd.)

Interrupting later similar comments by Pearson, Landry asked if she would rather they have walked away leaving piles of dirt. The current state of “dirt lot” was also pointed to by member James Nichols-Whorley as to why Dlouhy rarely sees residents in that area. Dlouhy was concerned that the Town was spending to build a park not where residents wanted one, but because a road was being moved. Nichols-Whorley pointed out that the property is next to the Library, close to the Town Hall and two of the Town’s main churches.

Planning Board member Marnie Hoolahan called in to speak as a resident. She expressed empathy for the Working Group’s difficult position in the middle of a controversial project. But she followed that she was also concerned about the spending on designs.

In defending the Working Group’s work, Landry expressed her priorities for serving on it. She represents the Library Trustees to seek a design that would make sense for allowing the Library to hold outdoor programs on the property. However, she made clear that as a resident her personal priority was to ensure the park respectfully remembered the indigenous people and others (including slaves, indentured servants, and paupers) that came before us who may have buried outside of the Old Burial Ground walls. (Some unmarked graves may be under the copse of trees that will remain between the park and the cemetery.)

Gillespie stated that when she saw the park was being planned despite residents concerns, she wanted to lend her expertise to help ensure the design would be the best it could be.

As for their defense of having spent close to $7,700 on design work before issues were cleared up over potential graves and land ownership, Landry said the “surprise” invoice was authorized by the Select Board, not the Working Group.

As with many of the process/transparency/communication issues that have plagued this project, it isn’t that black and white. As Pearson highlighted, most of the expenses for the consultant’s work with the Working Group were already incurred when the invoice was presented to the Board.

At their June 30th meeting, the Group agreed with a recommendation by the Select Board’s representative Andrew Dennington to bring in a landscape design consultant to aid them. He explained that he had asked DPW Superintendent Karen Galligan about the possibility of getting some technical assistance on the project. She put him in touch with their engineering consultant, VHB. He suggested inviting the consultant to help them flesh out their ideas, in order to make a recommendation to the Select Board. The Group was in favor, but the concept of an associated cost was never raised.

In preparation for the August 25th meeting, VHB submitted invoices that included costs already incurred. The decision to spend on designs prior to soliciting public input was a disappointing surprise to at least two Select Board members when they were asked to approve the spend on the morning of August 19th. (Read more about that here.)

In that meeting, Dennington agreed that the Working Group would host multiple public forums starting with their August 25th meeting. He then worked with Town staff to promote that. It became clear within the forum that multiple members including the Chair weren’t aware the meeting was one. There was also confusion about what a public forum consists of versus.

For this time around the Group has already met to plan out how they will run the forum on Thursday. It will be facilitated by Roger Challen.

[Editor’s Note: Sorry I wasn’t able to share this – and other town news I had hoped to get to – earlier this week. The downside of being a one-man-show is there’s no one to share the work when you get sick!]

So sorry you’ve been under the weather, Beth…hope you are well now!

Thanks. Not 100%, but much better and hoping to be better able to keep up with the news this week!