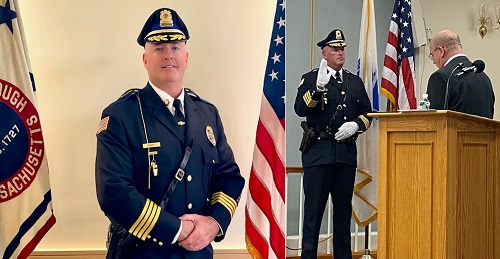 Yesterday afternoon, the Town of Southborough’s new police chief was sworn in (but apparently not for the first time). Ryan Newell’s promotion from “Acting Chief” to Chief was made official earlier this month. It was publicly celebrated during yesterday’s ceremony.

The Select Board selected Newell for the job on August 30th, pending negotiation of a contract.

That contract was approved by the Board on October 13th, prior to Special Town Meeting. At last week’s Board meeting, Chair Kathy Cook stated that Newell was sworn in on the 13th. She announced that a public “pinning ceremony” would be held on Sunday, October 23rd at the Senior Center.

Today, the SPD posted pictures from yesterday. The post described:

Last night was the swearing-in/pinning ceremony for Southborough Police Chief Ryan M. Newell. The ceremony took place at Cordaville Hall in Southborough, where the Chief was sworn-in in front of an audience of family, friends, co-workers, town officials, members of the public, area Police Chiefs & Officers, and many more. The ceremony included the posting of the colors by the Boys and Girls Scouts; the National Anthem sung by a Southborough resident from Algonquin Regional High School; the Pledge of Allegiance led by Southborough Veteran Steve Whynot; the swearing-in by Town Clerk Jim Hegarty; guest speakers from the Southborough Select Board (Chair Kathy Cook and Vice Chair Chelsea Malinowski); the Badge Pinning by Chief Newell’s wife, children, and mother; and final comments/thank you’ s from Chief Newell. The Ceremony was MC’ed by former Southborough Selectmen John Rooney.

Chief Newell would like to thank everyone involved with the ceremony and is looking forward to working with, and for, the residents of Southborough. Thank you!

You can view more photos here.

At the Select Board meeting on October 18th, Cook mentioned that Newell’s promotion leaves a command position vacant. She believed the process to fill Newell’s former position as Lieutenant will begin soon.