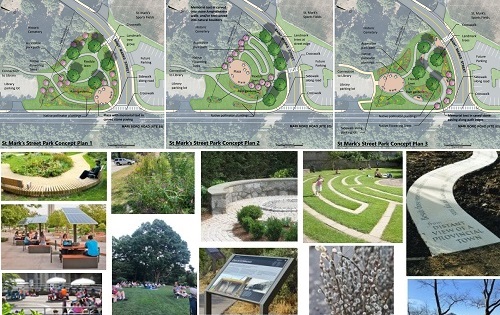 Above: The St Mark’s St Working Group hopes residents will participate in discussions about park designs and their priorities for elements to include. (images cropped from the potential design concepts)

After multiple postponements, the St. Mark’s Street Park Working Group Public Hearing has scheduled its public forum this Saturday. The group is seeking public input on design features for a park that the Town plans to build next to the Southborough Library.

An agenda was posted on Thursday for a meeting to take place November 12th at 10:00 am at the Public Safety Building. On Monday afternoon, the Town posted an announcement and the Working Group Chair Marguerite Landry reached out asking me to share with readers:

The hope of the Working Group is that a good park can be put there that is beautiful, and memorial, especially for marginalized people who have lived here. This includes native peoples, who were free, servants, or enslaved; African American both enslaved and freemen and freewomen; indentured servants, and poor people who could not afford to be members of the established churches.

In their discussion on Saturday, Landry said they would be discussing a name for the park name and themes as well as the design.

As I posted a few weeks ago, the Select Board plans to bring a request to Annual Town Meeting voters this spring to approve a land swap between St. Mark’s School and the Town to allow completion of the controversial park and redesigned intersection project.

As part of their presentation to voters, they hope to include a proposed design recommended by the working group. In late spring, the Board voted to add representatives of interested stakeholder groups to the Group. The intent was for them to bring their differing perspectives and priorities and to solicit public input, then recommend a design.

The Group worked with a Landscape Architect this summer to come up with some potential designs and elements to include in the park based on their priority lists. (The funding of that was among the many controversies that has plagued the project.)

In prior announcements for the public forum, the Group asked residents to consider those designs. You can see them below and find pdf versions here. (You can read more about the consultant’s presentation of the designs and the Group’s initial reaction here.)

The group has discussed taking the approach of presenting visions for the park, followed by small roundtables of participants fleshing out their ideas, then a facilitated group discussion with recaps from a representative for each table. Due to the format, remote participation won’t be allowed. According to the event flyer, the meeting won’t be recorded.

To avoid accusations of not being transparent, the Group does plan to allow remote feedback in a future meeting.

Updated (11/8/22 7:34 am): Initially, I noted that the Town had yet to publicize the forum and that the Group had planned to look into whether the meeting could be recorded even though remote participation wasn’t allowed. Yesterday afternoon, the Town posted an announcement to promote the forum and the Chair reached out to me with more details (some of which I inserted above). According to the flyer, the meeting won’t be recorded.

Updated (11/8/22 3:43 pm): I removed the flyer, because it included an incorrect bitly link to materials. As I had already included in my original post, you can find the designs here and the committee’s list of element priorities here.