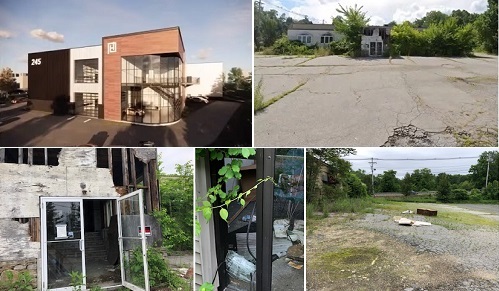 Above: A new business is in the planning stages to replace run down buildings on Route 9. The Town responded to criticism that in the meantime the facilities may not be properly secured. (images from materials in the story)

[Note: Full disclosure – The subject of this story relates to a situation related to a paid advertisement on MySouthborough*.]

Last week, the Town Administrator gave a public update on long vacant buildings on Route 9 that were purchased last December. I’m sharing that news, along with some more background — including the owner’s plans for a new business on the site.

TA Mark Purple told the Select Board last week that Fire Chief Stephen Achilles was satisfied that the buildings at 241 and 245 Turnpike Road had been “secured”, though not fenced as some may wish.

Purple noted that residents are unhappy that it is taking the new owners longer than they would like to raze the dilapidated buildings. He explained that the owners are waiting until they have their Planning Board permits lined up before they take that step.

I reached out to the Town Planner to find out if they are scheduled for a Public Hearing yet. They aren’t but have communicated to learn what is needed to apply.

Earlier this year, the owners did get a setback variance approval they needed from the Zoning Board of Appeals. In that meeting they shared more details on their future plans for the future business “Parkhaus”. (Scroll down for that.)

Issues with the vacant buildings

In January, I shared the news on the new business planned for the eyesore site that residents had long been eager to see a business come in and properly take over.

The Andrea Restaurant next to Parkerville Road shut down well over 20 years ago. Farrell Volvo purchased the property in 2000, then the neighboring lot in 2004. The dealership made use of the parking lots and left the buildings unused.

Following the purchase, the conditions at the property apparently worsened. Upset at learning that the former restaurant had been trespassed in and was unsecure, resident Jack Barron reached out to public officials to prod them to secure the site.

Following up on Barron’s complaint, District State Building Inspector Gene Novak inspected the properties. He reported to Southborough’s Building Inspector and a representative for the property owner that one building had an unsecure foyer and at the other the “rear entrance door glass side lite has been smashed in and the building is no longer secure.” He also noted that some construction debris was “dumped in the rear” of the first building and bags of grass clippings dumped off to the side of the second. You can read the messages (and see pictures) here.

Novak made some specific recommendations for securing the building, including installing “a temporary fence across the front driveway to deter access and dumping from occurring and until demolition or restoration is permitted.” He followed:

From a practical point of view and what I have done in the past with similar vacant buildings, the Fire Department along with the Building Department representatives meet the building owner/manager on site and walk through the building ensuring that combustibles, flammables and hazardous materials are removed and the building is marked according to the U.S. Fire Administrations guidelines.

Last week, Purple stated that there has been a long process with a lot of conversations between Southborough Building Inspector Laurie Livoli, Chief Achilles and the property owners. He assured that the owners wants to work with the Town and that Achilles had reported the building is secured.

Earlier this summer, in a letter to the Chair of the Select Board, Barron acknowledged that Achilles said the building was secure. But Barron insisted that a fence should still be installed:

the Chief candidly admitted that the owner of the Premises has presented no timeline for demolishing the building. Thus, the buildings are and will remain unsecured and unfenced, an invitation for potential tragedy, until the owner gets around to doing something. This is an alarming and, at a minimum, negligent dereliction of duty by Town employees

Barron also had his attorney Ginny Kremer submit a letter supporting his stance about the Town’s legal liability. Given that he is a plaintiff in an unrelated lawsuit against the Select Board, it’s not surprising that the only response sent was by Town Counsel, directed to Kremer. Jay Talerman wrote:

While we disagree with your factual and legal assertions, please be assured that we take all such matters seriously and will be in touch as the situation may warrant.

Dissatisfied, Barron urged me to write a story alerting the public. At the time, I had too much on my plate to focus on the topic. I offered that he could post a Letter to the Editor. He preferred to pay for an ad on the blog to highlight the issue to readers.*

On September 21st, representatives for Parkhaus went before the Zoning Board of Appeals. As part of their presentation, they described the business to be built on the site.

It feels a bit ironic that after ages of residents waiting for a business to use the site as more than an extra parking lot to store cars, the new business coming in is a facility to store cars. The key difference is that parking will be inside, in “luxury” condos.

Parkhaus plans to build 32 units that can hold 2-6 cars. The “condos” will have 20 ft ceilings (to allow mezzanines), a bathroom, and plumbing to allow for optional showers and kitchenettes. (While the units would be accessible 24×7, living or sleeping in the non-residential units isn’t allowed.) As shown in highlights from their slides below, the new building will look more like a modern office building than a parking garage:

The applicants told the Board that they would be pursuing an ANR (Application Not Require) through the Planning Board to consolidate the sites. They asked the ZBA to grant a variance to allow their business to have a smaller setback from Route 9 than called for in the zoning bylaws. The project’s engineer demonstrated that neighboring sites on either side have the same setback Parkhaus was seeking.

To grant a variance, the ZBA has to accept a hardship claim based on the land topography. The applicants pitched that without the variance, the business wouldn’t be economically viable on the site. ZBA Member Paul Drepanos was initially critical of that reasoning. He noted that no one forced the owner to build on those parcels. He said in his experience, if you are looking for a lot for your business and it doesn’t meet your requirements, you move on to another property.

Other members argued in favor of the ask. Member Craig Nicholson positioned that the hardship was based on asking one business to meet requirements not forced on other businesses in the area. The Board voted unanimously to grant the variance. As a condition of the approval, the ZBA required:

The condominium covenants and restrictions stipulate that there will be no long-term, exterior parking of vehicles

*Note: This is not a sponsored post. Jack Barron is paying for the advertisement on this site which he asked me to create highlighting his concerns about the restaurant with links for readers to learn more.

Thank you Beth for the update on the vacant and dangerous buildings on Route 9. I believe you accurately reported the situation. If the current town attorney were advising me and I owned the vacant and already noted by a state of Massachusetts inspector that it was dangerous I would quickly have a fence surrounding the building. Should G-d forbid something happen to someone at those dangerous buildings I shudder to think of the liability this Town will have to pay out. My suggestion at this point is that the advisory council should bring up these buildings on it’s agenda and decide if the Town should order a temporary fence be put in place around the dangerous buildings until construction begins. If they do not do this after the local publication MYSOUTHBOROUGH has let the Town residents know about this problem, than they may very well be included in a law suit if someone is injured and it is likely no such thing as qualified immunity or pleading ignorance will stand up before a jury. If I were sitting on that jury and someone was seeking damages and some law firm like Morgan and Morgan were representing the injured party I hate to imagine the award. Ordering a temporary fence is of zero cost to this town., the landowner pays. The only loss is what ever political donations for re-election the elected officials may receive from the developer/landowner. Jack Barron

I find it almost obscene that we are allowing luxury CONDOS FOR CARS to be built along Rt 9, and can’t seem to find the will or the way to build affordable housing for people.