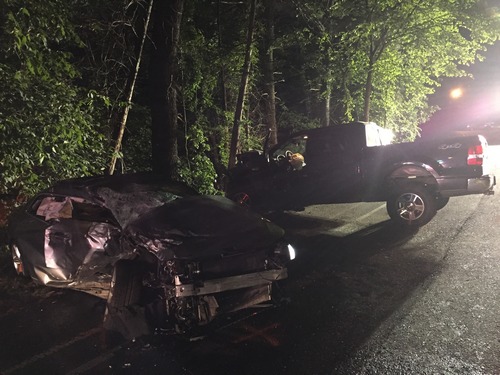 Above: The scene of a car crash that resulted in one fatality. (contributed by police)

Southborough Police have shared some, but not all, details on a fatal crash that took place in town late Sunday night:

On 7/3/16, at approximately 11:21 p.m., the Southborough Police Department responded to a report of a serious crash in the area of Framingham Road just past the intersection of Marlborough Road. Southborough Fire also responded. They were able to extricate the operator of a 2009 Audi who was taken to Marlborough Hospital and later pronounced deceased. The driver of a 2005 Ford F150 was also transported for treatment of a non-life threatening injury.

A preliminary investigation conducted by the C.E.M.L.E.C. regional crash investigative unit showed the Audi was traveling southbound at a high rate of speed when it side swiped another vehicle traveling north toward Marlborough. The Audi continued past Marlborough Road where it lost control crossing the center line as it continued sideways into the path of the Ford F150.

The names of those involved are being withheld pending further investigation and notification of next of kin. Westborough Officer Cliff Luce is the lead investigator. He is being assisted by officers from Northborough and Uxbridge.

Updated (7/15/16 1:30 pm): I mistakenly identified Marlborough Road as the crash site in the headline. It was on Framingham Rd in vicinity of Marlborough Rd.