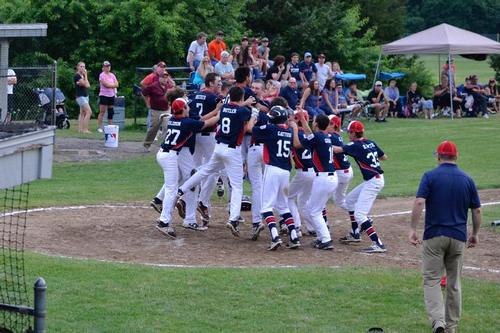 On Monday, I shared news that Southborough Senior Little League players were headed to a Sectional Championship against Swansea last night.

One look at the photo above tells you how that played out. (Click on thumbnail right for an enlarged close up crop that better captures their joy.)

But for the real excitement, you should check out the video from the winning moment of the game. Parents inform me that the game was tied 2-2 going into the bottom of the 7th inning when catcher Tony Massaglia got up to the plate.

To see the contributed video, click below. (Email subscribers can find it here.)

(If you didn’t watch the video – you missed Massaglia’s 3-run homerun to end the game.)

The team now advances to play in the State Finals against Woburn.

It’s a best-of-three championship against Woburn. The first two games will be played on Saturday at 1 and 4 pm in Oxford.