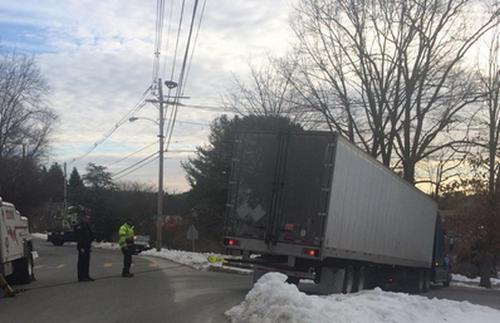 Above: One of multiple incidents with trucks ending up on a Deerfoot Road lawn after attempting to turn right from Flagg. (image cropped from contributed photo)

The Board of Selectmen are pursuing a “Truck Exclusion” on both Parkerville Road and Deerfoot Road. The decision went beyond recommendations by the Public Works Planning Board which didn’t recommend an exclusion for Deerfoot.

According to Southborough Wicked Local, selectmen were aware it’s likely to be rejected by the state. But after listening to residents about the situation, they decided they should try  – even if for just an “interim” measure.

As I’ve previously shared, a chief example of the problem with trucks on Deerfoot is the repeated damage to Thomas Joyce’s property across from the Flagg Road intersection. Police have had to respond several times after large trucks attempted an impossible sharp right turn from Flagg.

Residents have also publicly worried about the impact on walkers of a future large development, Park Central, planned off of Flagg Road. They have complained that the narrow, sidewalkless streets of Deerfoot and Flagg are already unsafe. Among walkers are students of Trottier Middle School and Neary School. The campus for the schools is between Deerfoot and Parkerville with driveways connecting to both.*

Parkerville does have sidewalks. But neighbors there have complained about noise and other issues with large trucks apparently using the street as a cut through between Route 30 and Route 9 where Ken’s Foods is located.

SWL covered the discussions and decision at Wednesday’s Board of Selectmen meeting:

Selectmen are looking for quick action to submit a plan to the state to prohibit some trucks on Parkerville and Deerfoot roads, where residents complain of noise and jack-knifing tractor-trailers.

The board voted Wednesday night to submit the documents for both streets, despite traffic studies showing the roads don’t have enough truck traffic to qualify for a prohibition under state guidelines.

The Public Works Planning Board voted to submit the Parkerville study, but took no action on Deerfoot. . .

Karen Galligan, public works superintendent, said the problem is with the layout of the intersection, which the town is working on as part of a safety study of Flagg Road.

“That is why the town did traffic counts out there and looked at it,” she said. “It is really the configuration of the intersection.”

[PWPB Chair Jamie] Hellen said the Public Works Planning Committee took no action on the Deerfoot truck exclusion because the town is working on other solutions.

A meeting is scheduled with the police and fire chiefs and the neighbors.

Selectman Bonnie Phaneuf encouraged the board to take action after hearing from Joyce and the other residents at the meeting.

“I think we need to be real forceful here,” she said. “This to me is obvious, even it is only a interim thing.”

*Note: The school administration made an announcement this spring that should be easing some school year traffic on Deerfoot when students are coming and going. Effective June 1st, the Deerfoot entrance could no longer be used by parents as an entrance for morning drop-off or afternoon pickup at Trottier and Neary. During those times (7:30-8:00 am and 2:20-2:45 pm), parents have to enter via the Parkerville Road driveway.

Can it extend to Parkerville on the south side too? Trucks take a wide turn off route 9 and come down Parkerville to Southville at all hours.Big trucks turning west onto Southville is dangerous given the speed of folks coming over the little hill by bridge street.

South side Parkerville also has 18 wheelers that use Gilmore rd (very narrow and curvy) to get to Flanders rd in Westboro. We could use some help on our side too!!!!!

Alan,
that’s bothered me for years also.
Speed humps near our biggest ball fields and one of our grammar schools make sense to me