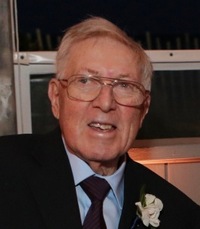 Gilbert Joe (formerly of Southborough) passed away peacefully on April 27, 2020, at the age of 85. Gilbert was born on December 2, 1934 in Edinburgh, Scotland to James and Christine (Cairney) Joe. He was a devoted husband, father, grandfather, brother, uncle and friend.

Growing up in Scotland he was an avid cyclist and was competitively ranked, racing with his brother Alan for the White Heather Cycling Club. In 1958 he won the Eastern Scotland B.A.R. Championship with an average speed of 22.75 M.P.H. He spent much of his late teen years camping and cycling throughout Europe with friends.

Although born and raised in Scotland, Gilbert was living in Bermuda when he developed a love for the game of golf. As fate would have it, on a blind date while visiting the United States, he met the love of his life, Marlene. He moved to America and together they raised their family. Gilbert went from a carefree bachelor to a father of four young children overnight. He embraced his new responsibilities with a kind and loving heart. Catherine was born the following year, a blonde hair, blue-eyed girl who clearly carried his Scottish heritage. Gilbert embraced his new life in the United States becoming a US citizen on December 10, 1975, and taking an active role in the Southborough Minutemen, Heritage Day Parade and the Historical Society. There was no missing his distinctive Scottish brogue and he often referred to himself as “Gil from over the Hill”, never forgetting the Country he came from.

Gilbert was a proud member of the International Brotherhood of Electrical Workers Worcester Local 96, and worked as a licensed electrician in the greater Worcester area until his retirement in 1999. The highlight of his career was close to his Southborough home where he was the electrical foreman on the construction of the MetroWest Water Supply Tunnel. Gilbert loved being on Cape Cod, where he built a family home with the help of his brother-in-law and nephews. His move to Belmont, New Hampshire was especially rewarding as he and Marlene built a home overlooking the beautiful New Hampshire landscape.

His love for the game of golf rekindled upon his retirement and he played as often as he could. He had no use for the cart and would often walk 36 holes at the local course and be home in time for lunch. It was not uncommon for him to play these same 36 holes 3 times a week – a testament to both his love of golf and his Scottish thrift.

Gilbert was best known to his children and grandchildren as “Mr. Fix-it” and there was little he could not fix. He had a passion for making scones and strawberry rhubarb jelly. His chocolate chip scones were the favorite of his grandchildren; cranberry orange scones were Marlene’s favorite.

A service celebrating Gilbert’s life will be held when it is safe to gather with family and friends to honor this wonderful, kind and loving man.

Donations in Gilbert’s memory can be made to The First Community Church of Southborough, 137 Southville Road, Southborough, MA 01772 or the Worcester Food Bank at https://foodbank.org

The BRITTON-SHREWSBURY FUNERAL HOME, 648 Main Street, Shrewsbury, MA is honored to be assisting with arrangements.

(Obituary and photo via Britton Funeral Homes and family)