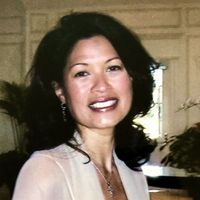 How will we remember Liza Litzow?

The beaches in Chatham when we have our toes in the sand and breath in the freshness of the sea, and when we eat pistachio ice cream, are running on ‘Liza Time’, decorating sugar cookies at Christmas or selling Girl Scout cookies, when at Church and the hymn ‘On Eagle’s Wings’ is sung, and when we hear the beauty of a piano or accordion being played….these are just a few of the many ways in which we will be reminded of Liza’s grace, fierce determination and love.

But most importantly, and Liza would agree, she will be remembered when we look at her husband, John and her children, Cara, Peri and Johnny and know that at the beginning and end of each day, they filled her heart.

Her family was with Liza when life came to its end. Liza died Monday, May 4, 2020 at her home in Newton after a courageous battle with ovarian cancer. She was 54.

Eliza Cruz was born on June 27, 1965 in Sandusky, Ohio to Iluminado and Aurora (Bunda) Cruz. Raised in the Washington, D.C. area, she graduated from Wootton High School and Boston University with the class of 1987. While in both high school and college she swam competitively. Liza and her family lived over twenty years in Southborough before moving to Newton in 2018.

Liza enjoyed a successful career in financial services for over 25 years, ending as the Marketing Director for Citizens Bank in Boston in its wealth management division.

Liza had a smile that would fuel and fill the room. She could easily engage in conversation and had an easy ability to laugh and find the humor in most anything. She told friends her name originated from Eliza Doolittle of the musical My Fair Lady. Liza successfully managed to balance work and home. She had grace and style, always a positive outlook and could even be a bit of a badass when the occasion called for it.

In addition to her husband, John she leaves her children, Cara D’Amico, Peri D’Amico and Johnny Litzow; her mother, Aurora; her siblings, Danny Cruz of Orlando, Loralei Cruz Osborn (Richard) of San Francisco and in-laws including James Litzow of Memphis, Stephen Litzow (Jenny) of Seattle, Catherine Norman of San Francisco and many nieces & nephews.

Liza’s family will gather privately. She will be buried in St. Adalbert’s Cemetery in Milwaukee, Wisconsin. A public Memorial and Life Celebration will be announced at a later date.

Our deepest and heart felt sympathies to Liza’s family, friends, and colleagues.
The Mariano Family

Dear Lori, Danny, and Liza’s children and husband, I am so sorry to hear of the passing of Liza. I will remember laughing, swimming at Darnestown, Wootton HS and times spent on Drews Court. RIP Liza from the Gravell family.

So sorry for your loss. I remember Liza quite well from our swim team days. She was a great person inside and out. May she rest in painless peace.
Sincerely,

Deepest sympathies to Liza’s family. She was a wonderful mom and volunteer with our Girl Scout troop for many years. I would often see her walking the roads of Southboro with her husband and would wave “hello” to me with a beautiful smile on her face.

So sorry to hear. She was a very strong, brave and beautiful woman! May your memories comfort you and your family at this time and always. And may her memory be for a blessing. Love and hugs to you all!

I’m so sorry to hear this. She did have an infectious smile in high school that had never changed. Rest In Peace dear Liza.

My family’s deepest sympathy goes out to her family. Her daughter and my son were in class together. Liza was always so friendly and willing to help out in any way. So sorry to hear this.