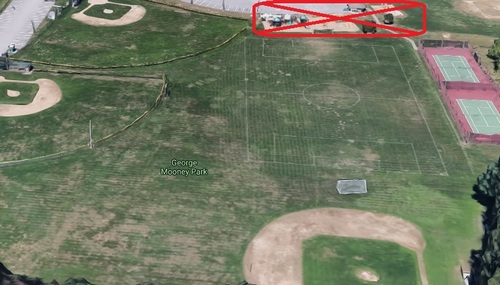 Above: Spaces to run around in town are about to get much bigger on Monday and Tuesday. But some things will remain off limits, like playgrounds and pavilions and organized/pickup games. (image edited from Google map of Finn School)

Last night, Southborough Recreation announced the timeline and rules for reopening most of the Town’s recreational parks, fields, and courts. Here is the full announcement.

All of the park reopenings will come with safety guidelines and prohibitions worth noting. Most will reopen on Memorial Day (this Monday, May 25th). Those include most of the fields at Neary, Finn, and Woodwards school campuses. Scroll down for some schedule exceptions.

Consistent with the state’s phased reopening plan, playgrounds will remain closed for now:

Playground facilities are still considered high risk, high touch areas. The public is asked to avoid them for their own health and safety.

The sites are part of the state’s “Phase 2” for reopening which could be in about 2-3 weeks if things proceed well. Stay tuned.

During this phase, youth sports, adult leagues, and other organizations are still barred from using athletic fields in an official capacity. (The estimated date for when that will be allowed is August 1st. It may be moved up or postponed “based on state and town recommendations”.  Stay tuned for word on that later this summer.)

Rules for field use include capping gatherings at 10 people, following state guidelines for wearing masks, keeping 6 foot distances from other visitors, giving wide berth to people you pass on paths and asking runners to warn others when approaching unseen.

If an athletic field is in use by other players, you are asked to wait outside the field until that group is done to avoid accidental contact with others or their equipment.

Users should not engage in pick-up games, organized games, or tournaments.

Some facilities/resources at the reopened fields will remain closed: tables, pavilions, public bathrooms, porta potties, and trash cans. (Trash is carry in/carry out.)

More guideline details are in the Town’s announcement.

As I noted, most open this Monday for public use. Here are the exceptions:

Tennis courts will take an extra day to reopen due to the holiday. Staff still needs to reinstall tennis nets and remove closure chains on the courts at Neary and Finn schools. Once open, there are rules for who can use it and how:

There are to be no more than 2 players per court and players must reside within the same household. This would be a Max of six (6) people inside the fenced courts at Neary, and four (4) at Finn. No sharing of equipment, no physical contact with other players. Take out what you bring in.

Last Monday, the Recreation Commission empowered Recreation Director Tim Davis to reoopen fields this Monday based on the state’s reopening plan. First, he would need to consult with appropriate safety officials and selectmen. Last night, with the announcement, Davis asked me to share his special thanks to the Board of Health and Emergency Management Team for their guidance and assistance.

*Updated (5/26/20 8:26 am): I originally wrote that the 9/11 field was scheduled to open today (Tuesday). But, I noted that based on past public use restrictions for the state leased field, I was waiting for some more detail on what will be allowed there. Recreation confirmed that the field’s use is only allowed by permit. The barriers to parking were being removed today to improve trail access at the site.

“Players must reside in the same household”. This restriction is a candidate for the Mayor DeBlasio “award”. 2 singles players out in an open area, almost constantly separated by MORE than the the 6 foot social distance can only play each other if they live in the same house??

Will we have drones to ensure there are no potential violations? Will potential players need to bring proof of residence?

The USTA has more reasonable restrictions at https://www.usta.com/en/home/stay-current/national/usta-statement-on-safety-of-playing-tennis-during-the-covid-19-v.html. Southborough should liberalize its over-cautious restrictions to allow singles matches between people not in the same household. Preliminary research strongly suggests that SARS-CoV-2 is hard to catch outdoors, that by far the greatest risk of transmission is being inside with a carrier for more than a few minutes.

However, with that said, older people and people with co-morbidities should not push the boundaries. They should be even more cautious than everyone else, and we all should continue to restrict our activities if we are in contact with high-risk people, lest we infect them.

“almost constantly separated” What about the times when they’re NOT “constantly separated”? What about the people playing in the adjacent court? Most of the tennis courts in Southborough are not single courts – they’re two or three adjacent to one another. Now, couple this with the heavy breathing that goes on while playing tennis – you know, to enable inhalation of airborne droplets deep into the lungs – and you’re set up for infecting yourself or others. You are running after the ball, right? No, just strolling back & forth?

What’s next, filing suit with the Town because you got sick?

No need for drones – a GREAT need for a pinch of common sense!

Common sense left the state and region three months ago and won’t come back until another 20% of the businesses go bankrupt. Not to worry, our politicians have a plan.

This miserable Plandemic is the most over-the-top cascade of centrally-orchestrated wussification I’ve ever witnessed.

And if our politicians have common sense plans, presumably they will no longer involve State Government mandate and export of active C19 patients into nursing homes . . . where they truly do harm the most vulnerable.

Cool the Jets there, Hand Grenade.

Sounds to me like you have more hysterical ways of Ending Life on Earth than an entire library of Stephen King novels.

Matthew, thanks for making me laugh in your last post! I am allowed to find something funny without offending anyone, right?