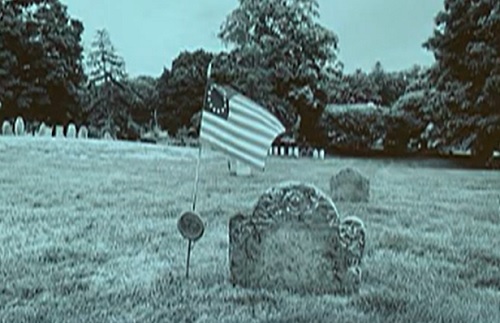 Above: Petitioners at Special Town Meeting failed to convince the majority of voters to tell the Select Board that the US. Flag and small markers at graves are the only appropriate flags to allow in the historic Old Burial Ground. (image cropped from Article 12 presentation)

At the end of the long night, the majority of Special Town Meeting voters opposed a non-binding Citizen Petition Article.

Voters may have been mainly in favor of keeping historic military battle flags in the Old Burial Ground. Although the flags were first placed over a 100 years after residents were buried there, many speakers defended the symbolism of Revolutionary War era battle flags as important for honoring the Town’s history and the service of veterans buried there.

Some votes may also have been swayed by a former Advisory member who argued against encouraging non-binding petitions.

John Butler referred to a pattern of residents disgruntled by actions of Town officials turning to non-binding Town Meeting Articles to publicly pressure a change. He argued that Town Meeting is the inappropriate forum, and the debates waste voters’ time. That comment didn’t cut short the debate that went on for over 90 minutes.

Most of the other arguments for and against the Article fell along the lines of prior discussions I covered last week. According to Town Clerk Jim Hegarty, voters continued to arrive late in the evening, even after 11:00 pm, for the meeting that opened at 7:00 pm.

It is possible that some were there specifically to vote on the Article. (Though some also may have been planning to vote on Article 13 on the parcel for St. Mark’s Park and Street, which ultimately was postponed without discussion.)

At last week’s Special Town Meeting, Debbie DeMuria, the organizer of a Citizen’s Petition, presented* her case that flying six historical military flags in the Old Burial Ground causes a legal free speech issue for the Town based on a Supreme Court ruling. She argued that removing them would fix the problem. She told the hall that her Article was to honor and preserve the historic integrity of the old cemetery. She proposed limiting the flag to the American flag rather than opening up the Town to the possibility that anyone could fly a flag there.

American Legion Commander Dan Kolenda and Veterans Graves Officer Steve Whynot (also the Town’s VFW Commander) gave a counter-presentation*. They pointed to the Town Counsel’s opinion that the liability that DeMuria’s petition described was inaccurate and that some of her printed commentary in the Warrant was misleading.

Adding to the emotion in the room, in their presentation, Whynot stated:

I feel here tonight, some of the comments that have already been made, that respect for our veterans is waning.

There were definitely more speakers in favor of defeating the Article than in favor. Although there were references to hundreds of petition signers, other commenters noted the lack of public in-person protests over the flags. Bonnie Phaneuf, who has long volunteered her time to maintain the memorials and the Old Burial Ground told residents that she generally walks the cemetery every night. She’s never heard anyone walking there complain about the flags.

One theme of the debate was a lack of consensus on the facts surrounding the question. That includes the implication of the Supreme Court’s ruling, how closely or not flags were linked to veterans buried in the cemetery, and what the flags have come to mean over time.

In the arguments against flying flags now publicly debated across the country as representing hate groups, Article proponents pointed to protesters who flew some of the flags at the Capital during the January 6th insurrection. Article opponents, like Bob Flynn, highlighted that many of those at the insurrection flew the American flag. He followed that we don’t let them take over that symbol. Nor would he let “some idiots” who flew the Gadsden Flag take that symbol from us.

Referring to the rioters, Colleen Hoppe said, “you can’t fix stupid.” She argued that flag opponents were trying to take away history. She followed that she was “disgusted” that her kids were growing up without respect for history because people are just changing everything.” Giving examples of other news stories around the country, Eric Hall indicated he believed this was cancel culture that goes too far based on lack of knowledge about history.

As someone who enjoys flying the Gadsden Flag, Dan Dinnocenzo argued that it doesn’t represent hate groups. For many like him it represents the idea that society as a whole doesn’t have the right to tread on the individual.

In contrast, Pamela Saitta argued that she wanted Southborough to send a more inclusive and welcoming message than she believes the flags represent. She also highlighted that the far majority of those buried in the cemetery weren’t veterans. Being fair to non-veterans in the cemetery was one of the arguments repeated throughout by Article proponents.

Historical Commission Chair Kevin Miller, speaking as a resident, responded to repeated claims that taking down the flags would disrespect veterans.

He explained that he was somewhat new to the controversy, as he joined the Commission after it voted to ask the Select Board to replace some of the flags. Miller told the hall that he initially really liked the flags being in the cemetery. He also assured his deep support for veterans.

After the issue was raised to his attention, Miller said that he reached out to the National Cemetery at Bourne, where about 80,000 service members are Buried. They told him that battle flags are never flown in the cemetery – only the American flag, MIA/POW flag, and, on Memorial Day only, the flag for the Dept of Veterans Affairs.

Miller followed that if the lack of battle flags is honorable treatment at the National Cemetery, it seems appropriate in our Town. Miller and others also noted the memorials for Southborough veterans and service members near the Old Burial Ground.

The President of the Southborough Historical Society, Michael Weishan tried a more aggressive stance. Prior to resigning from the Historical Commission, as Chair Weishan initiated public discussions opposing some of the military flags over a year ago. On Thursday, he again shared some of his research on radical groups’ use of some of the symbols over time. Claiming to represent the 300 people who signed a 2021 online petition asking the Town to replace the flags, Weishan argued that DeMuria’s legal arguments were sound.

Weishan stated that he formally submitted a letter requesting the Town take down the six flags or replace them with different flags, including the rainbow flag and the BLM flag. In a blog comment over the weekend, Weishan asserted that he will follow up to push that request, using legal means if necessary.

*[Editor’s Note: I tried to include links to the presentations during the meeting recorded by Southborough Access Media and posted to YouTube. Unfortunately, the blog’s code is interfering. You can check them out by copying and pasting the URLs below:

I don’t think that flying rainbow and BLM flags on public and hallowed ground is appropriate.
If Mr. Weishan wants to engage in virtue signaling, he can do so on his own property.
If the issue involves military flags, then the Veterans Groups should decide and submit what is appropriate for the cemetery.
I wish my old friend John Wilson were still around to weigh in on such matters. He wouldn’t have let the discussion get so out of hand.

If flying “An Appeal to Heaven” flag as adopted today is not virtue signaling, I don’t know what is.