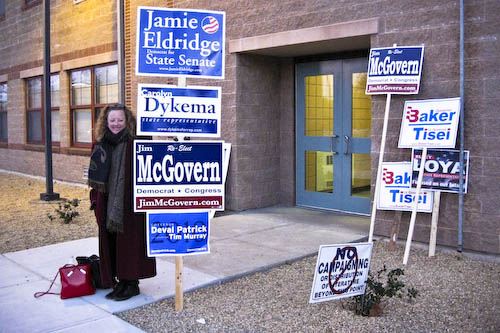 Above: Outside the Precinct 2 polling station today

It was a busy day at the polls in Southborough with 67% of registered voters casting a ballot in today’s election. While the state went mainly Democratic, Southborough showed its red side in several key races.

A resounding 54% of voters favored the Baker/Tisei ticket, compared to the 40% who voted for Patrick/Murray. Southborough also went Republican in the races for treasurer, auditor, state senator, sheriff, and in Precinct 1 for state representative.

In other races, including attorney general, secretary of state and US Representative, the town voted in favor of Democratic candidates.

As of 11:00 pm, the race between Danielle Gregoire and Steven Levy for Representative of the 4th Middlesex District, which includes Southborough Precinct 1, was too close to call.

Check back on Wednesday for more detailed results from Southborough, including where we came in on the ballot questions.

Did anyone else notice the complete disregard for political sign posting bylaws by Republican candidates? We found ourselves removing signs on numerous occasions that had been posted without permission.

I stood at my polling place (Trottier) holding a Mary Z Connaughton sign from 7 AM until almost 5:00 PM, with a few quick breaks. I observed: various other sign holders out there throughout the day, for candidates of various parties. There were signs stuck in the ground on either side of the walkway (I believe under the authority of the Town Clerk) advising us where it was permissible to stand. In my observations throughout the day, the sign holders of all parties were cognizant of and obeyed the posted boundaries. I saw no infractions and heard no complaints. In fact, when someone crossed over to say hello to someone “on the other side” we joked about putting the signs down and did, in fact, put the signs down so that we did not cross the entrance holding a sign.

I’ve almost always had good experiences with all parties and all Parties at the polls, and I certainly enjoy chatting with you, Betsy. I didn’t have much time for that yesterday, since I had a lot of get-out-the-vote work to do all day.

My comment at 4:21 was about lawn signs, as I think Pamela’s was.

Oh, yeah, as a Democrat, I noticed, though of course I noticed the signs on public land, not those on private property, where I couldn’t have told a sign with permission from a sign without. Marty Lamb – or his local sign person – was the worst offender, but Mary Connaughton’s signs were all over the reservoir on Framingham-Marlborough Rd. Baker-Tisei signs popped up in the last few days, which is not that unusual.

There may nonetheless be an innocent explanation for your experience. I had permission to put in a sign on Woodland Rd. and I did. But the homeowner kept asking for a sign. Turned out I had gotten the address number wrong. I left an apology at the wrong house (where the homeowner had pulled the sign) and put another sign at the right address.

The Republican candidate who kept littering your yard could have thought he or she had permission. The sign person could have been muttering about those #(#&*$ Democrats stealing the signs!

Independent Jon Loya had far more signs on public land than on any identifiable person’s lot. That’s usually an indication of an unwillingness to do the hard work to get legitimate locations or of a lack of supporters.

Steve Levy had signs everywhere, but the vast majority of them, if not all, appeared to be legitimate.

I’m planning to take the Democratic signs out tonight if campaign fatigue doesn’t send me to bed early. So if you see a guy getting in and out of a car to pull up signs, there’s no need to call the police!

Also, if you have a problem in future elections with the sign of a Democrat, let me know. There may be something I can do about it if I’m involved with the campaign.

I leave policing of Republican signs to the Republican Town Committee.

The election is over and it would be nice if we could stop sniping at each other for a day or two. Just one or two days please.

For the record almost all of the signs I saw were on public property. The Towns “right of way” on a modern road extends about 25 ft from the center of the road, well into what many of us think is our front yard. A persons property starts after that. My tradition most of us keep up that strip of town property and think of it as ours but it is not.

I love the signs, even those of candidates I disagree with as it is a symbol that we still have choices some freedoms left.

Let’s just pick up our signs and move on.

The signs in question belonged to Baker and Lamb, who did not have permission to post on our property.

Al you only see what you want to see! Open your eyes! Pamela is right, the Republican candidates had more signs at every major intersection on PUBLIC land or STATE owned land. I am sick of these signs and I hope someday a ballot question banning all political signs is passed.

Trust me, as a candidate who abides by the rules, I was as disgusted as the rest of you at the proliferation of signs randomly placed on public property. As Kelly noted, all of my signs were places on private property with the permission of the home owner.

I do want to take this opportunity to say “Thank you” to all of the Southborough residents who voted for me and gave me the chance to go represent your town on Beacon Hill. As I promised throughout the campaign I will work hard to represent your interests and bring accountability to state government.

I will be out in the next day or two to collect my signs since I’m sure we will be using them again in two years. If I happen to miss any, feel free to send an e-mail and we will come get them.

Thanks again Southborough for your support.