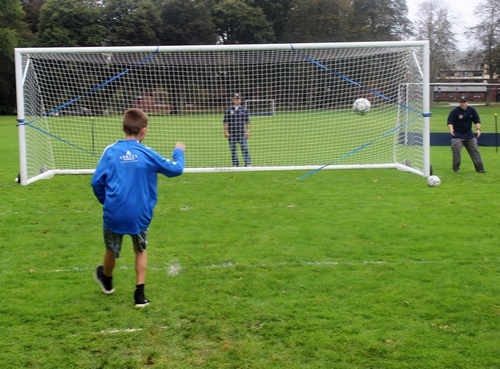 Above: Soccer-loving tweens can get their kicks at Heritage Day. The Knights of Columbus’ will again challenge them to take their best penalty shots. (photo by Beth Melo)

This weekend is promising to be a great one for kids to practice their goal kicks. With the 4th annual Soccer Challenge coming up, they’ll have special incentive to.

The Southborough chapter of The Knights of Columbus will again hold its Soccer Challenge on Heritage Day. (It’s not surprising that the organization chooses that day – known elsewhere as Columbus Day).

The highest scorers win, progressing to the district level.

Nearly 75 kids competed on the field last year. Several moved on to the regional and state levels. (If players are good enough, there’s even potential to move on to international competition.)